This series consists of approximately 500 prints and photos of immigrants and their institutions in U.S. and Canada. There is an index list with names, when available, that accompanies this series.

Item is a black and white photograph of Hortensia Allende, widow of deposed Chilean President Salvador Allende, at a rally in Vancouver. Image shows Allende in oblique angle profile standing behind a lectern. Beside her, partially obscured, is an ...

This grouping contains portraits of Douglas, family members and friends; most are larger than snapshot size.

Sub-series consists of photographs and photonegatives of Ethel and Wallace Wilson.

Subseries contains original photographs taken or collected by Philip J. Thomas. Thomas' photographs range in subject matter including research materials, folk song singers, and himself. The majority of the subseries are black and white negat...

File consists of photographs documenting C.D.C. activities in late-1973 and 1974, including marches and rallies taking place under C.D.C. sponsorship, fundraising events, public meetings, and so on.

Sub-series consists of prints and slides relating to Emily Carr, her work and house.

Sub-series consists of prints and slides of artists, paintings, Cheney’s work, and her friends.

Sub-series consists of an album of photographs depicting a 1969 tour of BritishColumbia Forest Products Limited’s Renfrew Logging Division, and some slidesof the company’s Crofton and Mackenzie operations.

Subseries consists of photographs, negatives, and associated materials (envelopes, metadata papers), most of which were created by Hanne. These images document aspects of her life in Europe prior to immigrating to the United States and eventually ...

Subseries consists of portraits of Hanne (and another woman, possibly her sister Elizabeth) taken by European photographers. At least five photographs of Hanne were taken by Grete Weissenstein (known professionally as Ingret) and at least two by M...

Sub-series consists of photographs and negatives pertaining to Pacific MillsLimited’s operations in Ocean Falls, B.C., and the construction and operation ofthe previous mill. Sub-series also includes many photographs relating to thedevelopment of ...

Sub-series consists of six photographs that were published in the CZ News in1963.

This group is comprised of photographs Douglas used to illustrate magazine and newspaper articles (primarily those articles written in the 1950s and 1960s). They are from various sources, including Douglas' own photos, prints obtained from ar...

Images depict Beatrice Millar engaged in various product demonstrations, preparing for one or more television appearances, group photos of B.C. Hydro staff. The subseries also includes photographs used for the publications Millar worked on while a...

Subseries consists of minutes, correspondence, bylaws, publications, newspaper clippings related to the Point Roberts Historical Society’s administration as well as its community and cultural endeavours. It is notably composed of photographs taken...

Files in this subseries reflect the functions and activities of the Policy Review Committee (PRC) of the BC NDP, including its various policy subcommittees and committee liaisons.The PRC functions as an aggregate body, composed of policy subcommit...

Polls were a regular part of election preparations for the BC NDP, and over time, many different companies were engaged by the New Democrats to conduct baseline polls, panels, and focus groups. While polls were often conducted specifically leading...

Sub-series consists of records related to the Positive Players project. The project was designed to facilitate access to resources and support for positive women in their middle years.Record types include budgets, contracts and funding agreements,... 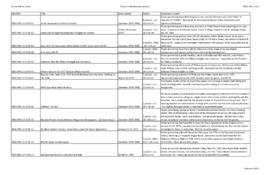 Subseries consists of records related to Manson's involvement in the Presbyterian Church, such as his work fundraising for the construction of St. Andrew's Hall at the University of British Columbia.These records include church publicati...

Series consists of records that are generally related to the activities of former Presidents and Vice-Presidents of the National Association of Japanese Canadians (NAJC).

Press Release Relating to Foundation of Canadians for Democracy in Chile

Item is a typewritten press release issued on C.D.C. letterhead announcing the establishment of C.D.C. Item also records that C.D.C. has wired to the Canadian Prime Minister its opposition to further Canadian relations with the new Chilean governm...

Sub-series consists of exhibition catalogues, a brochure, and an article.

Sub-series consists of printed drawings depicting scenes of native peoples and ships in Asia and original watercolours, including watercolours of the Columbia River attributed to Belcher, a watercolour of a waterfall at Panang by B.F. Browne, and ...

Subseries contains maps, reports, and informational packages on various tree farm license projects carried out by Western Forest Products and its predecessors. The subseries is arranged by project.

Part of Service, Office and Retail Workers Union of Canada, Locals 2 and 4 fonds

The sub-series includes materials used to make contacts with the public and like-minded organizations. Consists of mailing lists, newsletters, press releases, copies of the weekly bulletin, drafts for leaflets and information brochures.

The Publication and author files subseries contains files with marketing and promotional records that are specific to an author and/or a publication.

Publication of the Carr-Cheney-Toms letters

Sub-series consists of published copies of chapbooks, monographs, journals, and conference proceedings that Miki wrote, co-wrote, edited, co-edited, and contributed to. Volumes are arranged chronologically according to date of publication except f...

Subseries contains publications published by Western Forest Products and its predecessors, mostly originating from MacMillan Bloedel. The majority of the material dates from the 1990s, and includes annual reports, internal updates, and publicity m...

Part of Council of Forest Industries of British Columbia fonds

Subseries consists of various studies, surveys, and news clipping associated with the Skagit Valley in general and the ROSS Dam project as well as several printed testimony logs and accompanying exhibits related to the R.O.S.S. Committee.

Subseries contains textual records from Epstein's poem <i>In the Sliding Passenger Seat</i>. The records include a draft of the poem, the published edition of the poem, and correspondence between Epstein and Lazara Press.