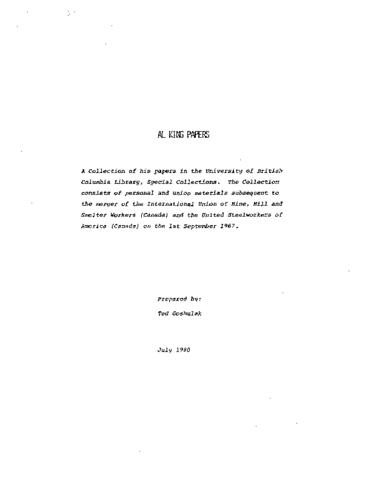 Albert King was born March 3, 1915 in St. Anthony's, England and moved to Canada in 1928. In 1937 Al King was hired at Consolidating Mining and Smelting (CM & S). King quickly became involved with the International Union of Mine Mill and Smelter Workers. At this time, the International Union of Mine, Mill and Smelter Workers was struggling to reestablish itself in Trail, reviving a union tradition started with the Western Federation of Miners (WFM). The WFM became the International Union of Mine, Mill and Smelter Workers in 1916 and was generally known as Mine Mill. However, the dream of an independent union died with Ginger Goodwin at the end of the first world war. In 1941 King enlisted with the Canadian Air Force and was overseas until 1944. While he was gone, Local 480 of the International Union of Mine Mill and Smelter Workers (Canada) was certified. King resumed employment in Trail in 1946. Elected vice president of the Canadian Legion, Branch 11 and chair of the Canadian Legion Housing Committee, he was also chairman of the Labour Progressive Party from 1946 to 1949. In 1950, King became the president of Local 480, Trail BC a position he held until 1960. In 1960 he was elected Secretary, Western District of Mine Mill and in 1966 was named to the National Executive board as representative for Western Canada responsible for all hard rock mining and smelter operations. In sympathy with the Italians he worked with at Cominco, he changed his name to Albert Lorenzo King in 1966. When Mine Mill and Steel merged in 1967 Al King was demoted to Staff representative. Later, in 1972 he became compensation officer and was released from all other union duties so that he could devote his full attention to Workmens' Compensation Board matters. (Later called the Workers' Compensation Board) In 1968 King joined the Compensation and Safety committee of the BC Federation of Labour, an association he was to maintain for almost ten years. King became chair of the committee in 1972 withdrawing in 1976 to make room for Marianne Gilbert. In 1977 the renamed Health and Safety committee presented a report titled Perspectives for Health and Safety. One of the services offered by Mine Mill, and subsequently Steel, was the Western District Union Death Benefits plan, a fund enabling widows of miners to apply for assistance after a mining fatality. Al King became the administrator of the Western District Union Death Benefit plan in 1972. King served on the Regulations Advisory Board of the Workmen's Compensation Board in 1970 and chaired the BC Federation of Labour's Workers' Compensation Board Committee in 1975. Steel identified the education and certification of miners as a priority and King became responsible for schools and workshops throughout the province. King became the Director of the Medical Services Association (MSA) in 1972. After his retirement from the USWA in 1981, King continued to advocate for WCB claimants, and teach courses on the WCB appeal process. He published his memoirs in 1996 in collaboration with Kate Braid. Al King died in April 2003.

Records of Al King can also be found in the Selkirk College Archives.