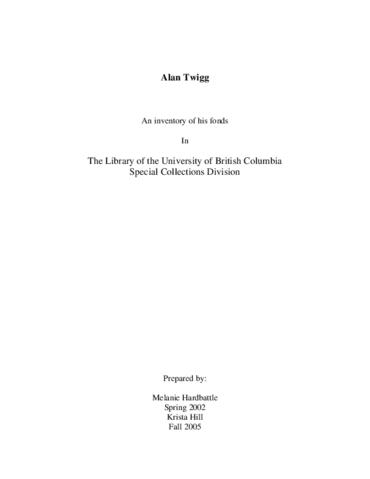 5.72 m of textual records and other material

Alan Twigg was born in North Vancouver, British Columbia in 1952. Since 1987, he has owned and published the newspaper, B.C. BookWorld, Canadas largest circulation publication about books. In 1985, Twigg co-founded the B.C. Book Prizes, and he was its executive director and chief fundraiser in the 1990s. He also created the Van City Womens Book Prize, and coordinated it between 1992 and 2005. Twigg was a representative of the Writers Union of Canada, on the original Board of Directors for the Canadian Centre for Studies in Publishing at Simon Fraser University. He also served on the boards of the City of Vancouvers Public Art Committee and the Vancouver Cultural Alliance. He is a founder of British Columbias annual Lifetime Achievement Award for an outstanding literary career in British Columbia, which he has also coordinated since 1995. In 1994, he organized events aiming to honor George Woodcock, who was British Columbias most prolific man of letters. In the 1970s and 1980s, Alan Twigg worked as a freelance writer. From 1995 to 1998, he wrote a weekly editorial column for <i>The Province</i> newspaper. He has written for The Quill & Quire, BC Historical News, as a theatre critic forThe Georgia Straight, Globe & Mail, Toronto Star, Ottawa Citizen, Macleans, Vancouver Sun, Step and Pacific Northwest Review of Books. Alan Twigg appears frequently as a guest on CBC Radio, and he has been the host of a CBC television series about B.C. authors. Alan Twigg has taught at the University of British Columbia, Simon Fraser University, University of Victoria, and at high schools. He hosted Simon Fraser Universitys third annual Symposium on the Novel at the Wosk Centre for Dialogue in 2004. In 1999, Twigg coordinated a fundraising campaign for the B.C. Civil Liberties Association, an organization which he continues to support.;Alan Twigg has been married since 1973 to Tara. They have two sons and continue living in Vancouver.

Acquired directly from the creator.

Photograph envelopes from B.C. Authors Subject Files series bear the name(s) inscribed on the back of the photograph exactly as they were written by the creator.