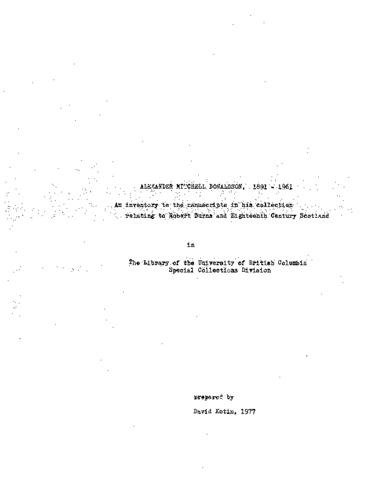 Alexander Donaldson was born in Glasgow, Scotland, but emigrated to Canada in 1909 where he worked as an auditor for the Ford Motor Company. During World War II he served as an investigator for the War-Time Prices and Trade Board. From 1954 to 1961 he worked at the Vancouver Public Library. Donaldson's collection of books by or about Robert Burns, which began in the 1930s, developed into one of the finest private collections on Burns.

The fonds consists of books by and about Robert Burns and 18th century Scotland and Donaldson's correspondence and papers relating to the development of his Burns collection.