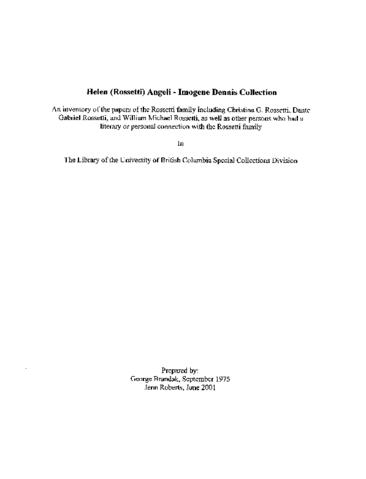 The Angeli-Dennis papers came to the University through two separate acquisitions from the former home of Helen Rossetti Angeli at Woodstock, England. Dr. William E. Fredeman acquired the papers on behalf of the University. The first acquisition in 1966 consisted primarily of papers of William Michael Rossetti. The second acquisition in 1972 resulted in further Rossetti family papers from Imogene Dennis, Helen Rossetti Angeli's daughter. For further information on the holdings at Woodstock prior to their acquisition, see William E. Fredeman, Pre-Raphaelitism A Biblio-critical Study, Cambridge: Harvard University Press, 1965, pp. 55-56.

The collection was handled by researchers interested in the Pre-Raphaelites prior to the papers' deposit in the UBC library. No doubt the provenance of the manuscripts was disturbed. Upon their arrival some of the papers were arbitrarily interfiled on various subjects such as D.G. Rossetti's state of health and his work, Poems, 1870 . Also, letters to William Michael Rossetti were re-arranged from their chronological order to an alphabetical one by a researcher. Rather than attempting to reconstruct the papers to their original order, the papers were arranged into groups of Rossetti family members and non-Rossetti family members. For example, the letters ofRobert Browning and A.C. Swinburne were not returned to Rossetti family groups to become incoming letters of Dante Gabriel Rossetti, William Michael Rossetti, etc. A manuscript by William North which was found in the papers, but seemed to have no relationship to the family papers, was arranged under a separate group, the William North papers. The same procedure was followed with the papers of other non-family members.