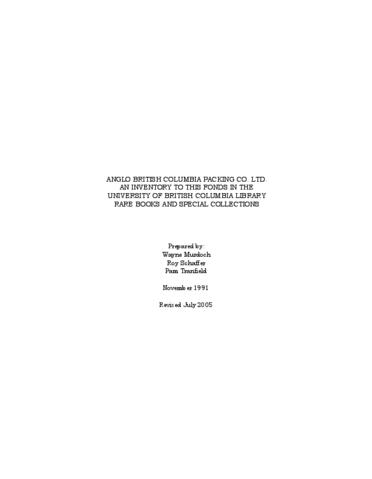 In 1889, Henry Ogle Bell-Irving acquired options on nine operating fish canneries: seven on the Fraser River and two on the Skeena River. On 14 april 1891, Bell-Irving purchased a Prospectus for $330,000. Later that year on the 22 December, the Anglo-British Columbia Packing company was incorporated in Middlesex, England. Bell-Irving's firm, then named Bell-Irving and Patterson, was appointed first Managing and Selling Agents. They maintained a head-office for the company in Vancouver, and titular head-office in London, England.

In 1931, after the death of H.O. Bell-Irving, the management of the Anglo-British Columbia Packing Company was assumed by Bell-Irving's son Richard and Peter Traill, both former directors. In 1966, the company expanded its operations to Caraquet, New Brunswick, where it built a herring reduction plant. The Anglo-British Columbia Packing Company sold the salmon cannery business in1969,yet continued to operate the herring reduction plant until 1974, when the company folded completely.

For further information see also:
Lyons, Cicely. Salmon, Our Heritage: The Story of a Province. And an Industry. Vancouver: Mitchell Press, 1969; and

The records date from 1891 to 1968 and were acquired by the University of British Columbia's Special Collections between 1970 and 1972.

The records of the Anglo-British Columbia Packing Company were acquired by the University of British Columbia's Special Collections between 1969 and 1972. There is no accession documentation for this fonds, and the name of the donor and reasons for transfer to this institution unknown.

The following are series identified within this fonds:

There are no restrictions on this material.