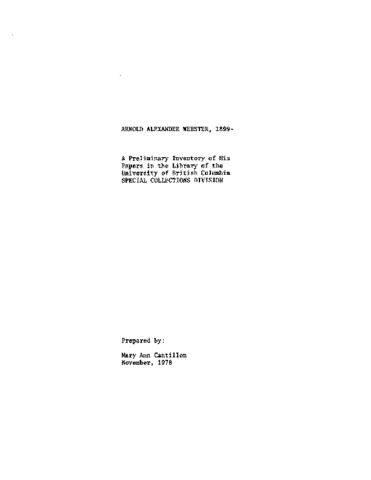 Arnold Webster was born in Vancouver and raised in Agassiz, B .C. He obtained his M .A. from the University of British Columbia . Webster became a teacher and principal in the Vancouver School Division. He joined the CCF in 1932 and became its B .C . provincial president. He also served on Vancouver Parks Board and as a member of the UBC Senate. In 1953 he succeeded Harold Winch as leader of the provincial CCF and was elected MLA for Vancouver East. He served one term as Leader of the Opposition and then retired briefly from politics. His return after the organization of the NDP, he was elected MP for Vancouver Kingsway and served from 1962-1965.

The fonds consists of biographical material, incoming (1926-1964) and outgoing (1945-1965) correspondence, a typescript and published edition of Webster's textbook Living Together in Canada and subject files. The fonds also includes pamphlets and clippings relating to various subjects.