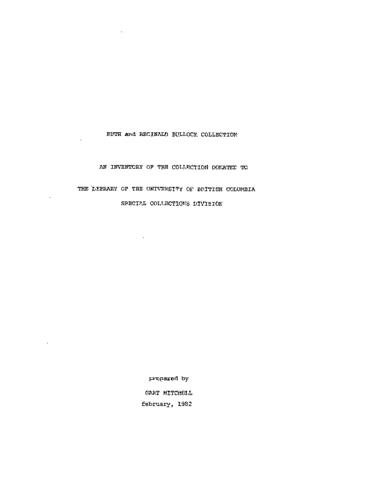 Reginald Bullock (1905-1979) was a boilermaker by trade and worked at Wallace Shipyards and Burrard Drydocks in Vancouver. He was active in his own union and with various political parties espousing the socialist cause including the CCF, the League for Socialist Action, and the Socialist Workers Party. The Bullocks were expelled from the NDP in the 1960s. Ruth Bullock met her husband in 1938. She was active in the socialist movement and as an advocate for human rights. A thesis was written about her by Heather McLeod entitled "'Not Another God-Damned Housewife': Ruth Bullock, The 'Woman Question' and Canadian Trotskyism", Simon Fraser University, 1993.

The fonds consists of the subject files, posters, photographs and pamphlets relating to the activities of the Revolutionary Workers League and its predecessors the League for Social Action, Socialist Educational League and the Revolutionary Workers Party. Research and subject files contain information on unions and the labour movement. Fonds includes correspondence and meeting programs.