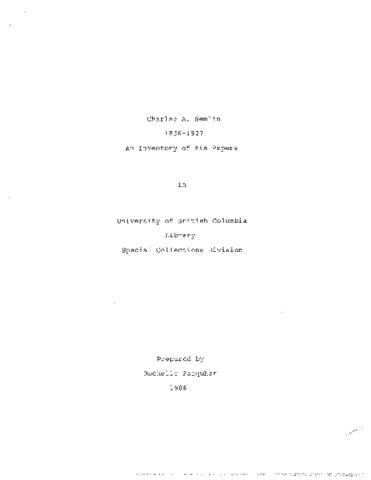 C.A. Semlin was born in Barrie, Upper Canada. He travelled to the west coast to seek his fortune in the gold fields in 1862. Although unsuccessful in this endeavour, Semlin remained in British Columbia as a farm hand. He was later hired to operate Cornwall Ranch and also the hotel, the Wayside House. He served as a Member of the Legislative Assembly (MLA) from 1882 to 1900. In 1894 he became leader of the opposition, and he was called upon to form a government in 1898.

The fonds consists of a letterpress copybook containing his outgoing letters as Premier of British Columbia (1898-1900), as well as financial records, correspondence and other material relating to the Dominion Ranch, Semlin and Stuart and the Interior Stock Raisers' Association (1870-1918).