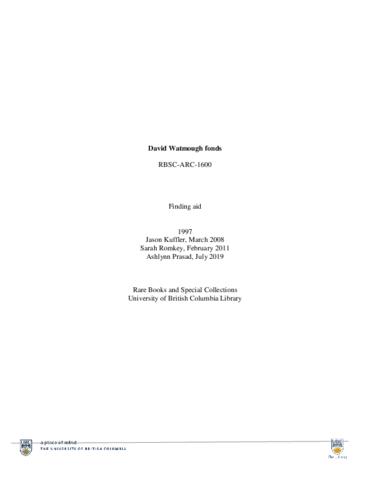 8.75 m of textual records and other material

David Arthur Watmough was born August 17, 1926 in Leyton, Essex, near London, England. His parents Gerald Arthur Watmough and Ethel Florence Bassett returned to the family's native Cornwall soon after, and David Watmough passed his childhood on a farm in St. Kew, near Bodmin, Cornwall. From 1937 to 1943 Watmough was educated at The Cooper's Company School, London, after which he was briefly employed as a reporter for The Cornish Guardian, Bodmin. He saw active service as an Ordinary Seaman in the Royal Navy from 1944 to 1945 when he was discharged. Watmough returned to London to read theology at King's College at the University of London until 1949 when he took his degree. His studies at King's College led him to France to research on the Catholic priest-worker movement, from which he produced a book, A Church Renascent (published in 1951). In 1949 Watmough moved to France, travelling to Paris, Lyons and Marseilles to complete this first book, while also tutoring English. In Paris in 1951 he joined company with an American named Floyd St. Clair, who remained his life partner until Floyd's death in 2009. Watmough arrived in New York in 1952 and travelled to Palo Alto, California where he audited courses in creative writing given at Stanford University by Wallace Stegner. Returning to the East coast he assumed employment as an assistant editor at the Holy Cross Press, West Park, New York from 1953 to 1954. With his father's illness in the spring of 1955 Watmough returned to England to become a Talks producer for the British Broadcasting Corporation (BBC) Third Programme, and in 1956 an editor with Ace Books, London. Watmough travelled again to the United States in 1957, to San Francisco where from 1957 to 1960 he continued to write fiction, completed a book on D.H. Lawrence, and was a critic and feature writer for The San Francisco Examiner and book reviewer for KPFA Radio and KQED Television stations. For the Canadian Broadcasting Corporation (CBC) he covered the 1961 and successive summer International Vancouver Festivals as a music and theatre critic.;Watmough settled permanently in 1962 in Vancouver, Canada, and his partner Floyd became a much-beloved UBC French professor and opera critic. Watmough became a Canadian citizen in 1969 following several years as a freelance broadcaster for the CBC hosting Talking About Books from 1961 to 1967 and as a columnist on visual arts and theatre for The Vancouver Sun from 1965 to 1969. As a critic Watmough wrote for the London journal Opera, and reviewed for The New York Times Book Review, The Spectator, Canadian Literature, Canadian Theatre Review, Saturday Night and other journals. By the mid sixties he began to write plays such as Friedhof, produced in Canada and in Europe, and My Mother's House Has Too Many Rooms, produced in the United States, and others which aired on CBC Television and Radio. In 1968 he presented dramatic monologues entitled Pictures from a Dying Landscape in Vancouver, Toronto, New Jersey and New York City, and soon was performing these monodramas on radio and touring across Canada, the United States, West Germany and the United Kingdom. In British Columbia Watmough was head in 1968 and 1969 of creative writing at the Okanagan Summer School of the Arts, served as the first president of the Writers Federation of British Columbia, and represented British Columbia writers for The Writers Union of Canada; he also served as first chairman of the writers' guild for the Association of Canadian Television and Radio Artists. A book of plays, Names for the Numbered Years, was published in 1967 by Bau-Xi Art Gallery of Vancouver in a limited edition illustrated by Claude Breeze.;During the seventies Watmough performed widely, wrote and published several collections of short stories and monodramas including Ashes For Easter and a novel No More Into the Garden, made an LP recording of Pictures from a Dying Landscape, and received a Canada Council Senior Arts award, in 1976. From 1979 to 1981 he hosted his own arts programme ArtsLib for CBC Television. He edited the Vancouver Fiction anthology and wrote The Unlikely Pioneer, a history of Western Canadian opera centering on Irving Guttman, both books appearing in 1985. In the eighties Watmough contributed to a number of anthologies, published a second novel The Year of Fears, and continued to write numerous short stories, some of which were published in three collections, The Connecticut Countess, Fury, and Vibrations in Time, which was also released as a recording on compact disc and cassette. From 1991 to 1993 he was a regular columnist for Vancouver Step magazine and completed a third novel published in 1992, Thy Mother's Glass, and then published a fourth in 1994, The Time of the Kingfishers, as well as continuing to write short stories as 'connected fictions' such as Hunting With Diana. For half a century Watmough was engaged in writing not only as an author and activist, but additionally as a correspondent with many literary figures, notably W. H. Auden, Margaret Laurence, Timothy Findley, Maria Tippett, and Jane Rule, as well as visual artists John Koerner and Gordon Smith, among others. Watmough was the first openly gay male writer in British Columbia and produced 20 books over the course of six decades. He passed away in 2017.

The fonds consists of records generated and assembled by David Watmough related to his life and career as a novelist, short story writer, playwright, monodramatist and performer, poet, critic, broadcaster, journalist, and teacher. The fonds includes series of records arranged in twenty divisions, with the greatest portion related to writing and literary production: novels, short stories, plays and dramas, monodramas, poetry and songs, nonfiction books, diaries and journals, essays, collections and anthologies, recordings, reading scripts and performance files, radio and television broadcast scripts and project files, film scripts, lectures, addresses, and orations, journal articles, interviews, and reviews of books, exhibitions and theatre performances, as well as correspondence, finance and business files, subject files including published material about Watmough and copies of published material by him, and ephemera and miscellanea. The arrangement of records in files by the creator has been respected where such order exists. The fonds contains textual records, both manuscript and typewritten as well as computer generated, some printed, published material, an occasional sketch or drawing, several sound recordings of Watmough performing, a small number of electronic records, and a number of photoprints and slides kept with the original files where possible. Some monodramas have been retained in the original bindings provided for performance by the creator.

Copyright remains with the estate of David Watmough and permission to publish his work must be obtained from there.

Inventory available. PDF document attached.
Photographs from original accession and accruals prior to 2019 processing are interfiled with textual records. Photographs that are part of 2019 processing have been assigned the following identifiers: RBSC-ARC-1600-PH-01 to PH-283.