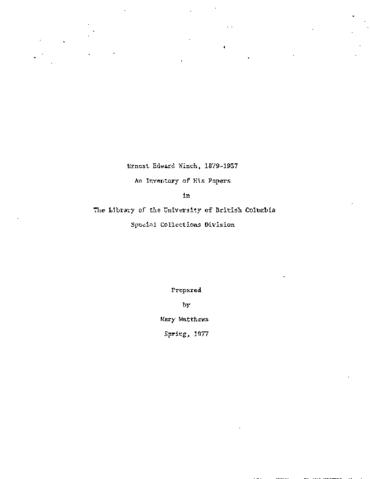 Ernest Edward Winch was born in Harlow, England, in 1879. He died at the Vancouver General Hospital in January, 1957. And during his restless life that stretched between those poles of destiny he established himself not only as a politician, and an uncompromising socialist at that, but primarily as a friend of the poor and the week. Settling permanently in the Lower Mainland of B.C. in 1910, Ernest Winch, bricklayer, joined the Bricklayer's and Stonemason's International Union, No. 1, Vancouver. During the next fifteen years he was an active unionist, especially as an organizer in the International Longshoremen's Association, B.C. Loggers Union, and Lumber and Camp Worker's Industrial Union of the One Big Union. He also served a term as secretary of the Vancouver, New Westminster, and District Trades and Labour Council.

In equating the advancement of the working class with the advancement of the socialist movement, he held membership cards in the Social Democratic Party of Canada, B.C. Federated Labor Party, Independent Labor Party, and Socialist Party of Canada prior to his involvement with the Co-operative Commonwealth Federation. In 1933, he was elected to represent Burnaby in the provincial legislature on behalf of the C.C.F. and continued to represent that constituency until his death. During that period of time he was a leading proponent of social legislation in the areas of workers' compensation, prison reform, mental illness, drug addiction, and housing for senior citizens.

The fonds reflects Winch's various interests in the cause of humanity ranging from capital punishment to the protection of fur-bearing animals. The files also contain much valuable information on the activities of the C.C.F. and his role within the party. To a lesser extent, the files contain information on his earlier activities within the labour movement and events during the depression of the 1930's.

The fonds was transferred from Boag House to the UBC Library in 1963.

File were classified into six series -- general, C.C.F., legislature, elections, personal, and miscellaneous. Although there is much material on the C.C.F. and Winch's personal activities in each series, the order has not been changed. For example, the personal correspondence file contains information pertaining to the formative years of the C.C.F. A detailed listing of the contents of the subject files has been provided to ensure that researchers may not ignore certain files that might seem irrelevant for their purposes. Certain files, such as his radio speeches, 1936-1956, have been listed in chronological order without providing the topics of the speeches.

Further material on the activities of Ernest Winch may be found primarily among the records of the Provincial C.C.F. in the Angus Maclnnis Memorial Collection and, to a lesser extent, other records and private papers relating to the C.C.F. and labour movements are available in the Special Collections Division of the UBC Library.

An excellent study of Ernest Winch's career has been written by Dorothy Gretchen Steeves entitled, The Compassionate Rebel Ernest E. Winch and His Times.

Physical location of this fonds is box 76 to 79 in the Angus MacInnis Memorial collection.