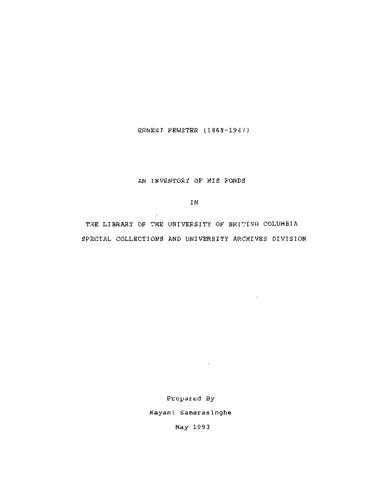 Ernest Fewster was born in Berkshire, England. His family moved to Canada in 1887 and to Vancouver in 1888. His father started a feed and seed business. Between 1898 and 1902, Fewster studied medicine in Chicago, Illinois. He practiced medicine in Southern Kansas, where he met and married Grace E. Smith in 1903. They returned to B.C., setting up a practice in Rock Bay, Vancouver Island. They moved to Vancouver in 1911. Fewster had an avid interest in literature and writing. In 1916, he was instrumental in the founding of the Vancouver Poetry Society and was elected its first president, a position he held until his death in 1947. Several volumes of his poetry and prose were published and reviewed.