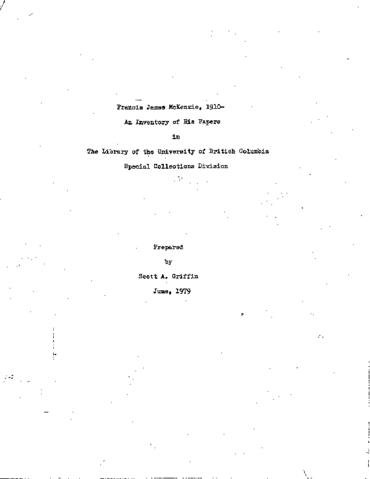 Francis James McKenzie was born on May 23, 1910 in the Grandview district of Vancouver. He attended Britannia High School and was a member of Tuxis-Older Boys Parliament, at one time being a cabinet minister. McKenzie was active in student affairs at the University of British Columbia. He was elected to the Student's Council and was president of the Student Christian Movement. After graduating from UBC in 1931, he organized the Vancouver branch of the League for Social Reconstruction. He was also a founding member of the Reconstruction Party.

Due to mass unemployment, Frank left Vancouver in 1932 to attend the Clacary Conference where farmer, labour and socialist interests met. McKenzie adopted the movement that came out of the conference, the Cooperative Commonwealth Federation.

He was called to the bar in 1937. Due to lack of positions for young lawyers in Vancouver, McKenzie was forced to move to Revelstoke to practice law. He moved his practice to Vancouver in 1947, the same year that he married Kathleen Farquahar.

McKenzie was active in C.C.F. on a large scale. In 1941 he joined the Provincial Executive. The same year he was the C.C.F. candidate in Revelstoke for the provincial election. In 1942 he ran in the federal riding of Kamloops. He became First Vice-President in 1942, Provincial Secretary from 1942 to 1947, and Secretary Treasurer from 1942 to 1948. In 1946, he was elected to the C.C.F. National Council. McKenzie ran in the 1949 federal election in Coast-Capilano and Burnaby-Richmond in 1953. He captured presidency in 1954 and 1955.

A small portion of records were created by McKenzie's brother, Arthur McKenzie. These include correspondences and articles written by Arthur in the form of clippings.

The fonds was transferred from Boag House to the UBC Library in 1963-1964.

Physical location of this fonds is box 80 to 82 in the Angus MacInnis Memorial collection.