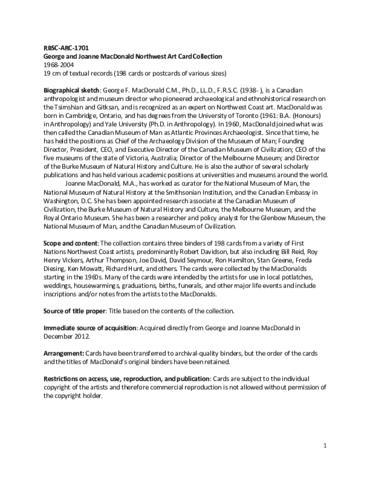 George F. MacDonald C.M., Ph.D., LL.D., F.R.S.C. (1938- ), is a Canadian anthropologist and museum director who pioneered archaeological and ethnohistorical research on the Tsimshian and Gitksan, and is recognized as an expert on Northwest Coast art. MacDonald was born in Cambridge, Ontario, and has degrees from the University of Toronto (1961: B.A. (Honours) in Anthropology) and Yale University (Ph.D. in Anthropology). In 1960, MacDonald joined what was then called the Canadian Museum of Man as Atlantic Provinces Archaeologist. Since that time, he has held the positions as Chief of the Archaeology Division of the Museum of Man; Founding Director, President, CEO, and Executive Director of the Canadian Museum of Civilization; CEO of the five museums of the state of Victoria, Australia; Director of the Melbourne Museum; and Director of the Burke Museum of Natural History and Culture. He is also the author of several scholarly publications and has held various academic positions at universities and museums around the world. Joanne MacDonald, M.A., has worked as curator for the National Museum of Man, the National Museum of Natural History at the Smithsonian Institution, and the Canadian Embassy in Washington, D.C. She has been appointed research associate at the Canadian Museum of Civilization, the Burke Museum of Natural History and Culture, the Melbourne Museum, and the Royal Ontario Museum. She has been a researcher and policy analyst for the Glenbow Museum, the National Museum of Man, and the Canadian Museum of Civilization.

The collection contains three binders of 198 cards from a variety of First Nations Northwest Coast artists, predominantly Robert Davidson, but also including Bill Reid, Roy Henry Vickers, Arthur Thompson, Joe David, David Seymour, Ron Hamilton, Stan Greene, Freda Diesing, Ken Mowatt, Richard Hunt, and others. The cards were collected by the MacDonalds starting in the 1960s. Many of the cards were intended by the artists for use in local potlatches, weddings, housewarmings, graduations, births, funerals, and other major life events and include inscriptions and/or notes from the artists to the MacDonalds.