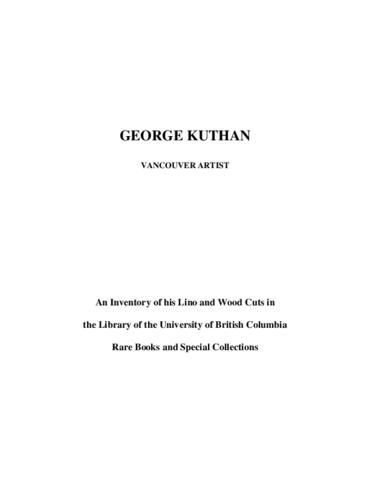 Born in Bohemia, Czechoslovakia, George Kuthan attended the University of Prague, lived in Paris in the 1940s and arrived in Canada in 1950. He held numerous one-man graphic shows, including at the Vancouver Art Gallery and the Art Gallery of Greater Victoria. His engravings have appeared in many publications including Kuthan's menagerie of interesting zoo animals (1960), Vancouver (1962), Aphrodite's cup (1964), and Scenes from snowbound (1970).

The fonds consists of engravings (mainly lino-cuts and some wood blocks) of flowers, trees, animals, insects, birds, sea creatures, floral and key designs, and erotica as well as other designs.