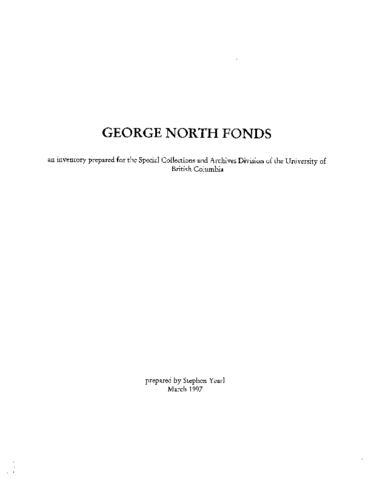 George North (1919-1990) was editor of The Fisherman, the newspaper of the United Fisherman and Alllied Workers Union (UFAWU), for twenty-two years from 1946 until 1968.
A graduate of the University of British Columbia, North Returned in 1968 in order to obtain a teaching qualification. North taught in Prince George in the early 1970s, becoming a British Columbia Teachers' Federation staff member in 1975. Between the years 1980 and 1990 North was head of the Federation's Bargaining Division. North was UFAWU Union Information Officer in June '67, and author of A Ripple, A Wave (1974), a UFAWU history of the Labour Movement in the local fishing industry. North also worked on the Native Voice, organ of the Native Brotherhood of BritishColumbia.

The records have been acquired by the Special Collections and Archives Division of the University of British Columbia from various donors. The majority of the material was acquired from Mrs. Margaret North, wife of the late George North, in April of 1992. A second acquisition was made from Mr. Jim McFarlane, staff worker for the British Columbia Teacher's Federation, in 1994. The third and most recent accession to the fonds occurred in March 1997, from Mr. Jack Nichol, former president of the UFAWU . All of the material described below was considered to be in George North's custody

Further accruals to the fonds are possible .