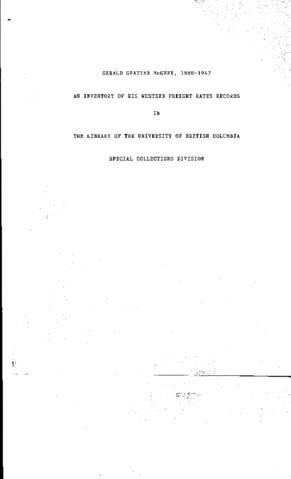 Gerald Grattan McGeer was born in Winnipeg, Manitoba on January 6, 1888. Shortly afterwards, his parents, James and Emily McGeer, moved to Vancouver, where his father ran a dairy business in the Fairview district. McGeer attended school in Vancouver, leaving high school to apprentice as an iron moulder. When he completed his apprenticeship, he decided to become a lawyer. He articled as a law student in Vancouver and then attended Dalhousie University and was called to the bar of British Columbia in 1915. In 1917 he married Charlotte Spencer, the daughter of David Spencer of Victoria. They had two children, Michael and Patricia. In 1922 he was appointed King's Counsel. McGeer first ran for election in 1916, when he was elected Liberal Member of the Legislative Assembly [MLA] for Richmond electoral district. He did not run in 1920; between 1925 and 1930 he contested three federal elections unsuccessfully: Vancouver Centre in 1925, Vancouver North in 1926 and Fraser Valley in 1930. In 1933 he was elected MLA for Vancouver Burrard. He resigned from the legislature in September 1935 to run in the riding of Vancouver Burrard in the federal election of that year. He was successful, and was re-elected in the same riding in 1940. He sat until the dissolution of the nineteenth parliament and was appointed senator on June 9, 1945. McGeer was also active in civic politics, twice being elected mayor of Vancouver, in December 1934 for the years 1935 and 1936, and in December 1946 for the years 1947 and 1948. McGeer made a name for himself in the early 1920s as counsel for the government of British Columbia during the province's attempt to have freight rates equalized. In the 1930s, he became interested in economics and monetary reform and wrote a book, The Conquest of Poverty, and a number of pamphlets and articles on the subject. He died in Vancouver on August 11, 1947.

The fonds consists of records relating to McGeer's career as a lawyer and politician. It includes correspondence, speeches and subject files (1931-1945). The fonds also includes material pertaining to the Western Freight Rates case.