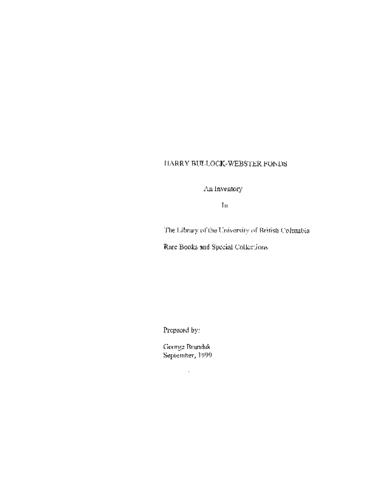 Harry Bullock-Webster was the British Columbia correspondent for The Graphic, a British periodical. Born in Britain in 1855, Bullock-Webster emigrated to Canada and by 1878 worked for Hudson’s Bay Company managing a trading post at Fort Connelly, on Bear Lake in Northern British Columbia. Here he sketched, painted, and drew life in the Rockies, sending this artwork to The Graphic magazine. In 1880 he returned to Britain, where he married a Miss Maud Williamson in 1884. From Britain, he emigrated to New Zealand where he lived until the time of his death in 1942.

Materials are in good condition, though some of the prints are fragile, and should be handled with care.

University of British Columbia’s Open Collections repository contains digital copies of the first accrual within the fonds available here: https://open.library.ubc.ca/collections/bullock . Photographs of the original watercolours in the first accrual of the fonds were also created as access copies, however the majority of these are stored as slides and negatives, and access to these images is recommended through the digital copies available at Open Collections.

RBSC staff created an inventory for the fonds in 1999 (see attached PDF). In 2018 an accrual was made to the fonds, and a finding aid for this has been added as an addendum to the original finding aid, available as attached PDF.