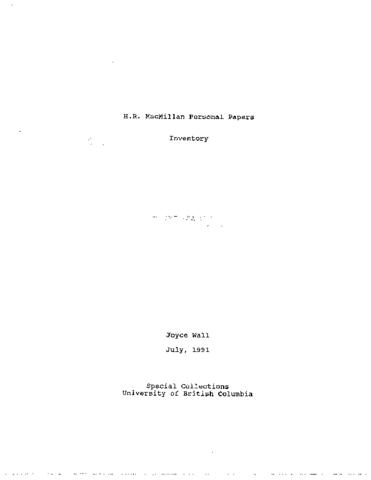 Harvey Reginald MacMillan was born September 9, 1885 in Ontario and grew up there . In 1908, he obtained a Master of Science degree in Forestry at Yale University. In 1912 he became British Columbia's first Chief Forester. During World War I he was appointed Assistant Director of the Imperial Munitions Board. He married Edna Mulloy (1911), and had two children : Edna Marion (Lecky) in 1912 and Gertrude Jean (Southam) in 1915.
In 1919, he left government employ and established the H.R. MacMillan Export Company Ltd. From then until he retired in 1956, he worked to establish the forestry and paper giant known today as MacMillan-Bloedel Ltd. During World War II however, he did take time to act first as Timber Controller, then as Chairman of the Wartime Requirements Board and finally as President of Wartime Merchant Shipping Ltd. Following the war his own business expanded greatly . In 1951 he merged with Bloedel, Stewart and Welch Ltd . and acted as Chairman of the Board until 1956. In 1959 Powell River Company Ltd. was added to incorporate all aspects of the forestry and paper industry. HRM served as Honorary Chairman from 1960 - 1961 and as a member of the executive council until 1969 when he requested his name not be put forward again. Apart from these interests he also acted as chairman of B.C. Packers Ltd. and served as director on the boards of numerous companies and institutions. HRM was also known as a great philanthropist and was involved in many community related projects and activities. His greatest interest was in education, especially forestry and forest engineering which he funded through grants, scholarships, books and facilities at UBC.
HRM died at 90 years of age, February 9, 1976.

The fonds consists of correspondence that spans the years 1898 to 1978, with the bulk of the material from 1930 to 1965. Fonds also includes transcripts, press clippings, notebooks, reports, minutes and publications. The fonds reflects the overlap of personal and corporate interests in MacMillan's life. Correspondence regarding UBC, Canadian and foreign business and personal contacts, his relationship with community groups and memberships he held, as well as his family history is included.

According to the agreement with the University of British Columbia and the Executors of the will and trustees of the estate of H.R. MacMillan, the Papers are closed until June 21, 1993, without the written permission of the Executors.