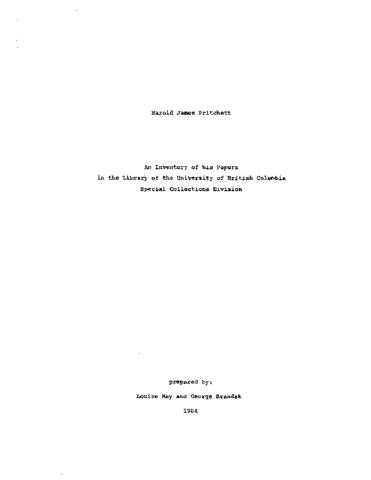 Harold Pritchett was born in Birmingham, England and arrived in Port Moody, B.C. in 1912. He began working at the Thurston-Flavelle Mill in 1919 and gradually became involved in union activities. By 1931, he was Chairman of the Fraser Mills Strike Committee and President of the Shingle Weavers Union in 1933. He was elected president of the Independent Federation of Woodworkers in 1936; then with the affiliation of the Federation of Woodworkers to the Congress of Industrial Organizations, he was elected founding president. Pritchett resigned from activities in the United States in 1940 and became President of District Council No.1 (IWA) for British Columbia. Following a split in the Union, Pritchett helped organize the short-lived Woodworkers Industrial Union.