Items in the collection were gathered by Barbara Hodgson. Many of the items were reproduced in Hodgson’s non-fiction publications In the Arms of Morpheus: The Tragic History of Laudanum, Morphine and Patent Medicines (2001) and Opium: A Portrait of the Heavenly Demon (1999). Hodgson was particularly interested in representations of opium production, transportation, sale, and ingestion, as well as similar representations of laudanum and patent medications containing morphine. Geographical areas depicted include China, countries in South Asia, and countries in the Middle East. Many representations of opium ingestion in the collection are orientalist in nature; individuals who have South Asian, Chinese, or Middle Eastern heritage are depicted in a racist, exoticized manner by Western film or medicine companies in order to lend an aura of “glamour” to various products.

The collection consists of a medal for bravery, likely awarded to a family member for meritorious service during the Boxer Uprising (義和團運動), which was a series of incidents in China with anti-imperialist and xenophobic roots that lasted from 1899 until 1901; and a fragment of a corresponding letter of recommendation. The medal was specifically awarded to the recipient for their conduct during the Siege of Tienstin, which was a major battle during the Boxer Uprising, and the letter of recommendation mentions a Mr. D’Arc, which is likely Desmond’s maternal grandfather who was a volunteer rifleman at Tientsin. Lastly, the collection contains an album consisting of photographs of Tientsin during and immediately after the Boxer Uprising. The album primarily includes photographs of troop movements and military equipment, but also includes a few personal family photographs.

The fonds consists of union membership cards, government documents, union constitutions and rule booklets and a Native Sons of Canada membership card and circulars (1916-1924). Records pertaining to the Native Sons of Canada (Vancouver Assembly) include union newspapers, subscriptions, financial records and personal and labour-related correspondence. The fonds also includes the immigration papers (written in Polish) of a young man and ephemeral material dealing with left-wing politics.

The collection consists of two scrapbooks which record events relating to the Vancouver Trades and Labour Council and the Asiatic Exclusion League, Vancouver. 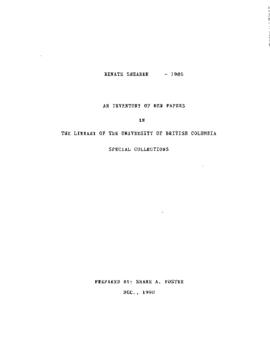 The fonds consists of correspondence, reports, notes, speeches, minutes, press releases, clippings and printed material arising from Shearer's career as social activist, planner, and teacher (1975-1988). Records include much material relating to the Solidarity Coalition, human rights, and the Multicultural Societies and Service Agencies of British Columbia.