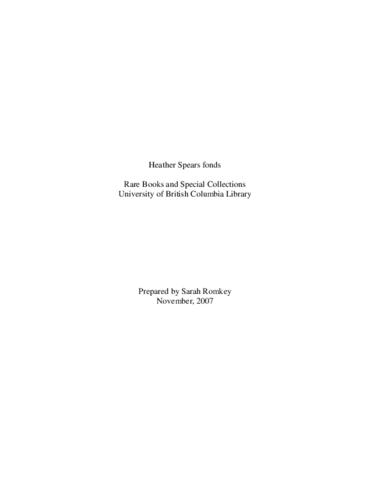 6592 drawings and other material

Heather Spears was born in Vancouver, and was educated at the University of British Columbia, the Vancouver School of Art and the University of Copenhagen. She has been based in Denmark since 1962. Her career as an artist and author has included over 75 solo exhibitions, 11 published volumes of poetry, 4 published works of fiction, and several published art books.;Her artistic subjects range from authors and poets, to children and infants (particularly premature and other infants at risk), to refugees, to professions and hobbies, to criminal trial proceedings. She is also sought after as a lecturer and teacher, and is a professional draughtsman. Spears has attended, as either a participant or artist-in-resident, such literary meetings and festival as the Hay-on Wye, Mantua Fesitvaletteratura, The Cheltenham festival, The League of Canadian Poets Annual General Meetings, the Poetry and History Conference in Stirling, and the British Association of Canadian Studies Conferences. Criminal trials at which she sat as courtroom artist include the Mears Island Hearing, the Robert Noyes Trial, the Midwifery Trial, all in the B.C. Supreme Court, the Reena Virk Trials at the B.C. Juvenile Court and B.C. Supreme Court, the Stephen Reid arraignment at the Victoria Courthouse, and at a trial of Palestinian children jailed for throwing stones. She has been awarded access to hospitals through residencies as an artist as well.;Spears has been awarded with several artistic and literary honours, including the Governor Generals Award for Poetry (1999), the CBC Literary Prize (1991), Hawthornden Fellow (1997-2005), and several grants from the Canada Council.;Reference: Heather Spears, writer and artist.

The fonds primarily reflects Spears career as a writer and artist. Some documentation from her youth, such as early artistic works and school papers, are also included. In addition to actual works of art, the records illustrate such activities as publishing books and articles, touring and exhibiting her work. Strongly represented are works which came from Spears presence at meetings, conferences and festivals, which include many drawings of poets and authors. Major accruals of works from the Canadian League of Poets AGMs, drawings of birth scenes, drawings from neo-natal units, and materials from the midwifery trial are arranged into their respective series; one series consists of research notes from Spears novel The Flourish; and the Artistic and literary projects files series contains material from many different writing, drawing and publishing activities. Artworks consist mostly of drawings on paper, with graphite or pastel as the medium. Textual materials include correspondence, clippings, contracts, posters and programs from appearances, and research notes.

Some restrictions apply regarding drawings and sketches.

Includes: 95.6 cm of textual material, 41 photographs and one book.