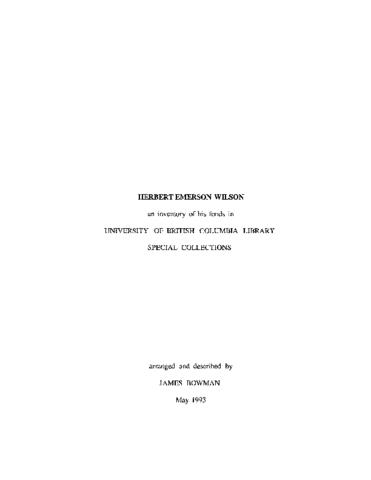 Herbert E. Wilson was born in Ontario and served in the Boer War. He became a Baptist minister but later embarked on a career as a safe cracker. He was imprisoned for twenty years in San Quintan, California. Following his release he worked as a newspaper columnist, artist, Museum of Crime curator, author and literary agent.

Following Wilson's death his second wife Amelia retained custody of his papers. In 1978 she sold his Boer War medals to Hugh MacMillan, and agent of the Archives of Ontario, but destroyed eight cases of papers fearing that they might contain incriminating evidence. In 1988 she donated the remaining papers to Special Collections .

The fonds consists of correspondence and literary typescripts which chronicle Wilson's varied career as minister, criminal and prisoner. Fonds includes personal and other correspondence regarding the author's literary work, as well as literary contract and copyright documents.