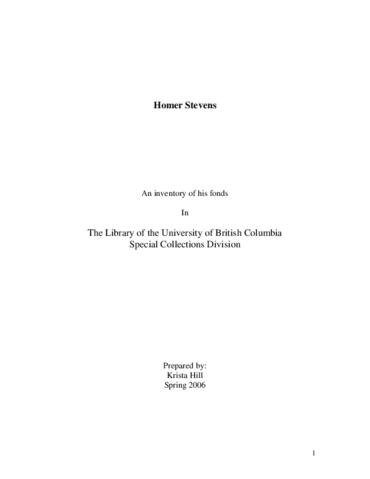 2.62 m of textual records and other materials

Homer Stevens was born on August 2, 1923, at Port Guichon, near Ladner, British Columbia. He began fishing on the Fraser River as early as 1936, at 13 years old. He began work as a full-time union organizer for the United Fishermen and Allied Workers Union in 1946, and was elected secretary-treasurer of that organization two years later, a position he held until 1970. Stevens was known for his steadfast role in this union, as well as for his affiliation with the Communist Party of Canada, and he was heavily involved in the fisheries on both the Pacific and Atlantic coasts. In 1967 he was prosecuted for criminal contempt of court while involved in a labour dispute in Prince Rupert, and subsequently spent a year incarcerated at the Mt. Thurston Prison Camp in Chilliwack, alongside UFAWU president Steve Stavenes. Stevens was later elected president himself, although he stepped down from that position in 1977, and returned to the life of a fisherman. Homer Stevens married Grace, his wife of 54 years, in 1948 and together they had four children, a daughter named Barbara and three sons named Bruce, John and Nick. Homer died in October 2002 at the age of 79.

The fonds consists of textual materials, photographs, slides, negatives, sound recordings and memorabilia created and collected during Homer Stevens career with the United Fishermen and Allied Workers Union (UFAWU), as well as in his personal life. The fonds has been arranged into six series according to subject matter: Personal, UFAWU, Mt. Thurston Prison Camp, Printed Materials, Ephemera and Memorabilia, and Newspaper Clippings.

When discernible, original order and titles have been maintained by the archivist, otherwise the materials have been arranged in broad subject files and in chronological order.

Further accruals are not expected.