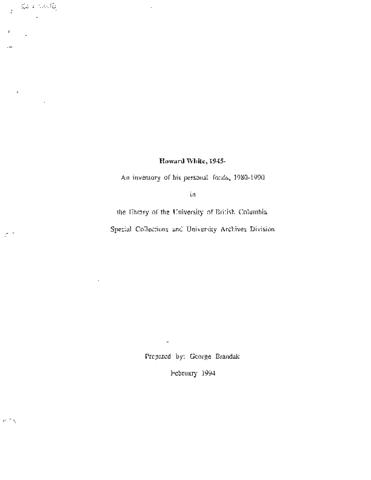 Howard White has spent much of his life on the Sunshine Coast of B.C. and at Madeira Park, B.C. He is the founder and editor of the "Raincoast Chronicles" series of books on British Columbia coast history and culture. In 1984 he incorporated the Harbour Publishing Company. It maintained the direction of "Raincoast Chronicles" as well as publishing more diverse works. In 1991 he was awarded the Stephen Leacock Medal for Humour for his "Writing in the Rain". His other books include "Ghost in the Gears" (poetry), "The Men There Were Then"(poetry), and "Patrick and the Backhoe". In addition, he edited "Accidental Airline", "Spilsbury' Coast", and "Forgotten Villages of the B.C. Coast", as well as writing Bill White's work history "A Hard Man To Beat".

The fonds consists mainly of his personal manuscripts and his activities relating to his work as published by Harbour Publishing Company. Much of his incoming and outgoing correspondence as well as subject files relate to books he has published or is planning to do so in the future. Major writers and/or correspondents include Anne Cameron, Pat Lane, Margaret Laurence, and Tom Wayman. A publication log kept by Hubert Evans (1928-1967) is also included.