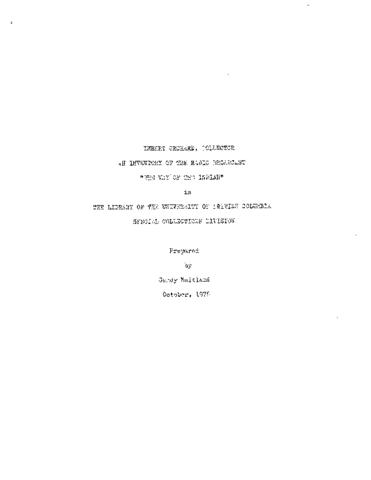 Imbert Orchard was born Robert Henslow and was educated in England. He pursued a career in theatre in Ontario, and came to B.C. after World War II. He was hired by the CBC as a regional editor for television scripts. He began documentary history programs for CBC Radio, his first series "Living Memory", airing in 1961. In 1972, Orchard left the CBC to join the Communications Studies Department at Simon Fraser University.

The fonds consists of records pertaining to the production of "The Way of the Indian", a program produced by CBC in 1961. It consists of transcripts of the program and transcripts of recorded interviews gathered to prepare the script. It also includes three essays, "Reminiscences of British Columbia from 1862" by Charles F. Morison [n.d.], "A Recollection of the Early Days in Northern British Columbia: Steamboating by Steamwheeler on the Skeena River" by J.W. Morison (1910) and a preliminary draft of "The Documentary in Sound" by Imbert Orchard [n.d.].