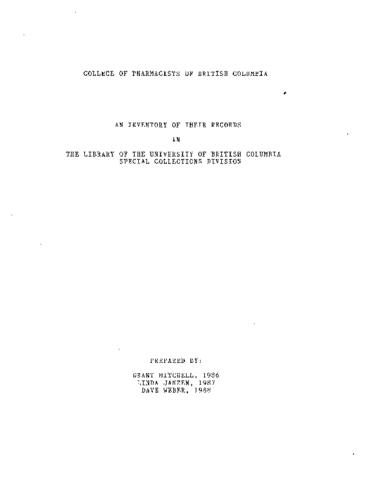 College of Pharmacists of British Columbia

The College of Pharmacists of British Columbia was originally established under the Pharmacy Act of 1891 as the Pharmaceutical Association of British Columbia. Prior to 1891, the practice of pharmacy was unregulated. The Association was initially located in Victoria, but later established College offices in Vancouver. The broad mandate of the College is to oversee the practice of pharmacy in the province which includes education, regulation, discipline and administration.

The fonds consists of minutes, membership records, financial records, correspondence and subject files from the office of the Registrar of the College. In addition, it includes prescription record books of early pharmacies in B.C. collected by the College.