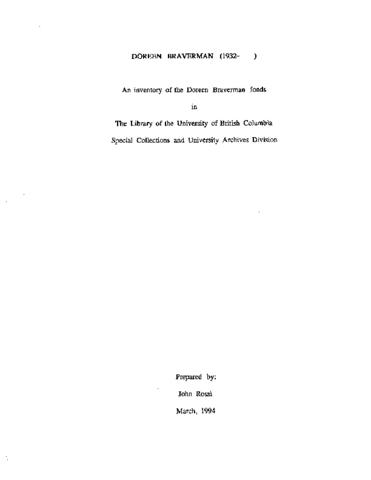 Doreen Braverman was born in Richmond in 1932 . She received a Bachelor of Education degree from the University of British Columbia in 1964. After being a teacher for several years, she became involved with the B.C. Liberal Party. She was on the campaign committee backing Garde Gardom and Pat McGeer in Vancouver-Point Grey in 1966 and 1969 respectively. From there, Doreen Braverman's involvement in the party escalated as she became president of the West Point Grey Liberals (1970-1971). Her success at that post allowed her to become treasurer of the B.C. Liberal Party in 1972 and its president in 1973.
Her efforts at promoting the Liberal Party, however, were not limited to provincial politics. In 1975, Doreen Braverman was co-chair of the Federal Liberal Party Convention in Ottawa. For the next ten years, she supported politicians who embodied the Liberal Party traditions. In 1986, Doreen Braverman decided to emerge from the shadows of supporting Liberal candidates and run as the Liberal candidate for Vancouver-Point Grey in the 1986 B. C. provincial election.
Despite her numerous political accomplishments, she was far from being a one-dimensional person . She wrote a thesis entitled Government and Small Business in 1983 as part of a Master of Business Administration degree. It assisted her in the management of several of her businesses. Thus, Doreen Braverman had diverse interests that led her to excel in multiple facets of life . She will always be best known, however, for her efforts in elevating the B.C. Liberal Party from a relatively unknown and indifferent party to a strong party with confidence and well-defined objectives. Any success that the B.C. Liberal Party has in the future could not have been possible without the past dedication of people like Doreen Braverman.

The fonds consists of correspondence, subject files, reports, memoranda, documents, newsletters, newspaper articles, pamphlets, letters and photographs relating to the activities of the British Columbia Liberal Party at both the provincial and federal levels and concerning the provincial riding of Vancouver-Point Grey and the federal riding of Vancouver-Quadra.
Although her papers document both B.C . and Federal Liberal Parties, the
majority of files deal with the B .C. Liberal Party.