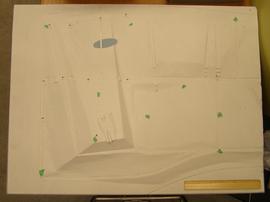 This item is a maquette version of the Digital Orca sculpture created by Coupland and installed at Jack Poole Plaza in 2010.

Catalogue to exhibition Logotopia: The Library in Architecture, Art and the Imagination

Postcard of Green Soldier No. 1

Contains a 5.5"x8.5" sketchbook, of which only about 15 pages have been filled, consisting mostly of calligraphy and other written material.

Contains a label for a 60"x72" Multi Throw, which appears to be the blankets used for Coupland's Button Blankets.

Contains a Canadian one dollar coin with two holes drilled into it, similar to button-holes.