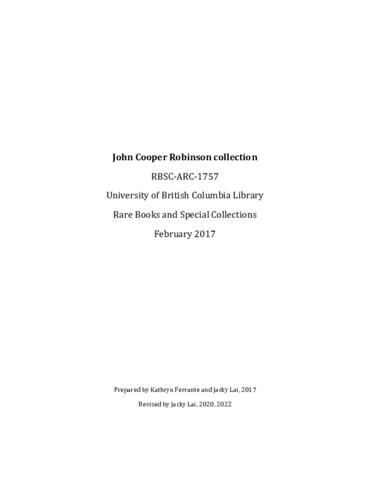 John Cooper Robinson was an Anglican missionary who lived and worked in Japan in the late nineteenth and early twentieth century. He was born in Canada on July 7, 1859, in the rural community of Blenhiem in southern Ontario, the eldest of five children born to Aaron and Melissa Rowe Robinson. Aaron Robinson had come to Canada from England, and the Robinson family grew up as devoted Anglicans.

John Cooper Robinson initially studied accounting, graduating in 1877, and worked at a bank for a few years before enrolling at Wycliffe College, an Anglican Church seminary associated with the University of Toronto, in 1881. He graduated from Wycliffe and was ordained a Deacon in 1886, then was ordained as a Priest in 1887. On May 26, 1888, he married Bessie Poynton. Later that year they moved to Japan, where he was the first Canadian-sponsored missionary. Robinson and his wife spent most of their remaining years in Japan, returning to Canada for a few short furloughs (in 1894, 1902, 1911, 1918, and part of WWI). They lived in the towns of Nagoya, Hiroshima, and Niigata. Robinson and Bessie had five children, two of whom died as babies. The other three were Lucy Winifred (born in Tokyo in 1890), Cuthbert Cooper (born May 26, 1893), and Hilda. Bessie passed away in the fall of 1919. Robinson passed away in July 1926 in Saint Thomas, Ontario, and is buried at the St. James cemetery in Toronto.

Robinson was an avid photographer and captured life in Japan at a unique time, when the country was transitioning away from feudal society. The photographs that Robinson took are the only known comprehensive photographic record of this period in Japan. Robinson also published a book in 1912, entitled Japan, Island Empire of the East: Being a short history of Japan and missionary work therein with special reference to the mission of the M.S.C.C.

Hilda Robinson remained in Japan with her parents for much of her life and assisted in their missionary work. Cuthbert and Lucy grew up there as well, but eventually moved back to Canada. Lucy married George Bryce in 1913, and went on to receive a PhD and published multiple books about India, where she and George did missionary work. Cuthbert was ordained in the Anglican Church, eventually becoming Bishop of Moosonee, Ontario. Lucy and Cuthbert both had children.

This collection came to UBC from the Cooper Robinson family. Robinson’s grandson, Stuart Robinson (son of Cuthbert Robinson) was in possession of the material, and left it to his heirs - Jill Cooper Robinson, Jean Robinson Hughes, and Christopher Robinson – who donated it to UBC in 2014. Some of the material had previously been shown at the Mary E. Black Gallery in Halifax, N.S., in the 2011 exhibition “The Marking of History and Artifacts (1888-1926): The Photography of John Cooper Robinson from Meiji-Tasho, Japan.” The map accrual in March 2022 was donated by Benjamin Bryce, who inherited the materials from Jill Robinson’s sister, Kim Robinson.

Fonds consists of over 4,600 photographic prints, negatives, glass lantern slides, and postcards, the majority of which were either taken or collected by Robinson. Many of the photographs relate to Robinson’s work as an Anglican missionary in Japan in the 1890’s through the 1920’s. These photographs document a unique time in the Japan’s history: the Meiji-Taisho period when the country was transitioning away from being a feudal society and beginning to open up to the West. This collection is one of the few comprehensive records of this time period. Subject matter of the photographs includes everyday life, work, and scenery in Japan, as well as the lives and works of missionaries.

Also included in the collection are photographs from Canada and the Robinson family’s travels around the world, as well as reproductions of missionary and religious texts or graphics.

The fonds also includes 10 maps of Japan used during Robinson’s missionary work, some with annotations of proposed Canadian jurisdictions in Japan.

Some items in the collection were removed due to poor physical condition such as cracked glass and badly peeled emulsions. Access copies and digitized images may be available for these items.

The items are arranged into files that maintain the order they had when they arrived at Rare Books & Special Collections. The material was originally housed in over 100 boxes of various sizes, some of which were labelled and some were not. The boxes showed evidence of having passed through multiple hands and being re-arranged for different purposes by different people, with various numbering systems and handwritings. However, many boxes, and sometimes the items contained in them, had annotations in what was likely Robinson’s handwriting and so it is probable that he arranged them.

There were two distinct series of boxes in the collection as it arrived at RBSC: some labelled with letters, going from A through Z, and others with numbers, from 1 through 52 (though there were no boxes labelled 27, 33, 47, 48, or 50). For boxes that had no such number or letter, an identifier was assigned, ranging from 1A through 2D.

All items have been assigned RBSC-ARC-1757-PH-XXXX identifiers during physical processing in 2016. Original identifiers are available in finding aid.

Access copies and digitized images for most of the collection are available. Please contact rare.books@ubc.ca for more information.

Information about missionaries of the Anglican Church of Canada can be found in The Christian Movement in the Japanese Empire, 1916 (John Lincoln Dearing, ed.), beginning on page 165. Available online through Internet Archive at https://archive.org/details/japanchristian14unknuoft.

The collection was described by K. Ferrante and processed by J. Lai from 2015 to 2016. The March 2022 map accrual was arranged and described by Allison Gale.