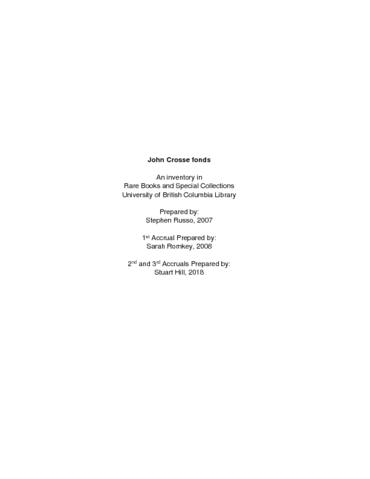 John Crosse was born in New Zealand in 1917. After attaining an undergraduate degree from Cambridge, Crosse completed a Masters in Engineering at Purdue University in Indiana. In 1959, he immigrated with his young family to Canada. Although he worked for some time as an engineer, Crosse was most passionate about the marine history of British Columbia. By 1968 he had written and published a centennial history of the Thermopylae, a Clipper that patrolled the shores of British Columbia in the 19th century. In the 1980s, Crosse began to dedicate his entire efforts to researching the first explorations of Europeans to North America's West Coast. He spent a number of summers in the 1990s following and documenting the precise route taken by Spanish explorers through British Columbia's Gulf Islands. As part of the research for these explorations, Crosse traveled to Spain and California to acquire background information and photocopies of the rare maps made by these early European explorers. In 1994, he wrote and published some of the findings of his research trips in an article entitled In the Wake of the Spaniards: Through the Rosario Strait. Even at the end of his life, Crosse continued to pursue his research interests, and he passed away in 2006 while working on a book about George Vancouver.

Fonds consists of Crosse's research notes, journals and annotated photocopies regarding the marine history of British Columbia. This material was primarily generated by Crosse in the course of his research activities from 1985-2006, but the fonds also contains annotated reproductions of numerous rare maps created in the late 1700s. The textual and photographic records have been arranged by Crosse primarily according to the subjects of his research. There are three series of cartographic material which are roughly arranged according to geographical area.
The first accrual relates to Crosse's research into early explorations of British Columbia’s coast. Accrual contains research notes, maps, photographs and correspondence. Two series are accruals to series in the first accession: they are the Manby research material series and the Narvaez research material series. Accrual also contains the Research papers and archival material series, the Miscellaneous research maps and oversized items series and the Panoramic photographs series.
Second and third accruals relate to the late eighteenth century exploration of the coast of British Columbia and the Northwestern United States, as well as information on Imperial Spain, the British Empire, and sailing ships in general. Records incorporated into Narvaez research materials series and research papers and archival material series. New series created include Alaska series, Nootka series, Columbia river exploration series, and correspondence series. Records include photocopies of primary source maps, charts, illustrations, letters, logs, and journals. Materials also include book chapters from secondary source materials, photographs of sailing trips that followed the course of the Narvaez expedition, correspondence with other researchers or persons relevant to Crosse's areas of interest, and charts produced between 1980 and 2000.

Box and file lists follow series descriptions for the textual and most of the cartographic material. For the series entitled 200 Years of Marine Surveys of English Bay 1791-1991, there is a detailed item list.

Rare Books and Special Collections has four of Crosse's published works in its SPAM collection. Call number for these publications are: SPAM21005, SPAM26335, SPAM22209, and SPAM20724.