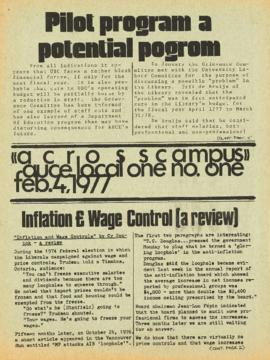 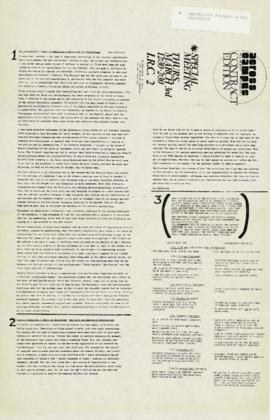 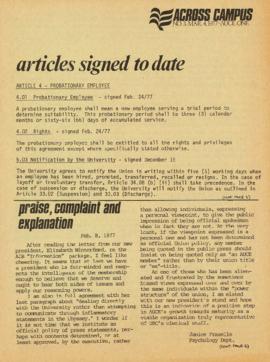 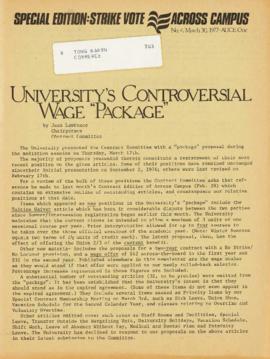 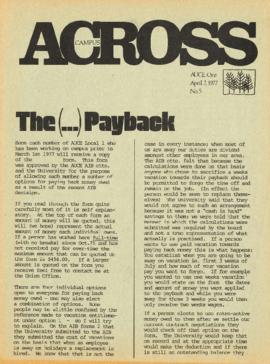 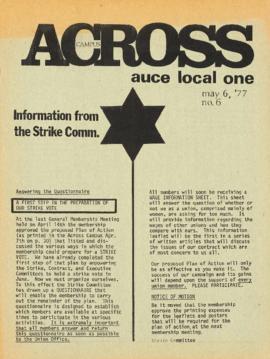 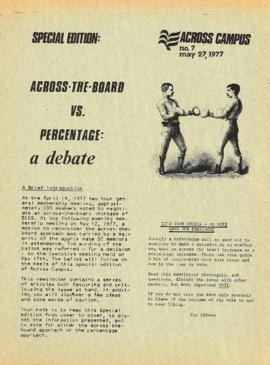 Across Campus Number 1, February 4, 1977 includes information on budget and staff cuts, a review of Cy Gonnick's ""Inflation and Wage Controls,"" meeting minutes from January 20, 1977, membership mailing lists, loans from the University Credit Union, increasing quorum, an article on SORWUC challenging the Bill of Rights over discrimination against women, grievance reports, a corrected financial report, a meeting agenda for February 10, presidential election ballot results, a help needed notice, a list of current executive, and a statement from the new president.

Across Campus Number 2, February 28, 1977 Contract Edition includes information on contract negotiations, union and university opinions on outstanding articles, maternity leave provisions and conflict with the UIC, a list of motions, and an obituary.

Across Campus Number 3, March 4, 1977 includes a list of contract articles signed to date, letters of support and criticism for the union president, the steward's seminar and producing a members handbook, a poem, a message from the union organizer, a correction to the financial statement, ballot results on the AIB rollback, a grievance report, a letter from the president discussing elections, a membership meeting agenda for March 10, and a financial report.

Across Campus Number 4, March 30, 1977 Special Edition: Strike Vote contains a report on the the university's wage proposal, pay grade tables, detailed reports on mediation and arbitration, information from the strike committee, and notices to members.

Across Campus Number 5, April 7, 1977 includes information on AIB repayment options, an analysis of the UBC wage offer, meeting minutes from February 10 and 24, 1977, and March 3 and 10, 1977, discussing topics such as contracts, lighting, correspondence, grievances, finances, an AIB report, strike committee reports, and nominations, a summary of a student rally against tuition increases, developing a members information handbook, opinions and letters from members on strike votes, membership participation, solidarity, support and criticism for union executives, benefits, SORWUC, contract negotiation, and wages, a list of executive positions and description of duties, notice of motions, and an agenda for the April 14 meeting.

Across Campus Number 6, May 6, 1977 includes information from the strike committee on preparing for a strike vote, the AIB payback, an appeal from the president for increased union participation, grievance reports, opinions and letters from members on negotiations, resignations and withdrawals, and wages and seniority, a meeting agenda for May 12, 1977, a list of current executive, meeting minutes from April 14, 1977, poetry, a reprinted article on a strike at SFU, a letter from an investment broker, and an essay on the ""non-union experience"" and the need for women to organize. Across Campus Number 7, May 27, 1977 Special Edition: Across the Board vs. Percentage includes background and debate around the different types of wage increases, including articles and commentary from members.