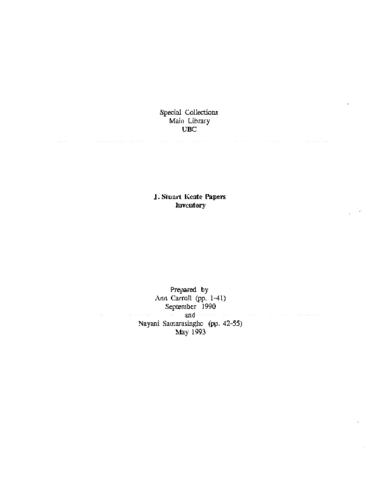 4.5 m of textual records and other material

James Stuart ("Stu") Keate was born in Vancouver on October 13, 1913. He graduated from UBC in 1935, majoring in English and History. While at UBC, he served as Friday editor of the biweekly Ubvssey. On graduation he went directly into journalism as a sports writer for the Vancouver Province newspaper. Between 1937 and 1939 he worked as a feature writer on the Toronto Star. In 1939 he returned to Vancouver to work for the Province.
During the war, Keate served in the Royal Canadian Navy as a naval war correspondent. From 1942 to 1945 he was an information officer in the north Atlantic and Pacific theatres. He retired as a lieutenant commander. At war's end, he joined the staff of Time Life magazines in New York and Montreal.
An invitation from Calgary financier, sportsman and newspaper magnate, Max Bell, brought Keate back to British Columbia as publisher of the Victoria Daily Times, a post he held
for 14 years before moving to Vancouver as publisher of The Sun.
In 1964 he was elected president of the Canadian Daily Newspaper Publishers Association and from 1964-1966, President of The Canadian Press.
As an active community worker, Keate raised $265,000 for a Salvation Army senior citizens' lodge and $350,000 as honorary chairman of an endowment fund for Brock House. At the international level, he was founding chairman of the Canadian Committee of the International Press Institute, which embraced over 60 newspapers. He was also a director of Freedom of the Press Committee of the Inter-American Press Association.
Keate was a member of the Canada Council for two terms from 1963-1969; of the UBC Senate from 1955-1970 and of the Board of Governors of UBC from 1966-1970.
After retirement in 1978, Keate wrote a memoir of his 45-year career called Paper Boy. It was published in 1980. Keate was married in 1939 to the former Letha Meilicke. They had two children; Richard and Kathryn. Keate died on March 1, 1987.

In 1989, Letha Keate donated Stuart Keate's personal papers to Special Collections, Main Library, UBC.
A second accrual of photographs was donated by Letha Keate in 1991, which comprises the final series in the fonds.

These papers consist of 5 metres of Stuart Keate's personal papers which he kept in files at the office or at home. They span the years 1918(?) to his death in 1987. The bulk of the collection dates from 1943 to 1987. The majority of the records are textual records. Other media include 268 photographs, one negative and 14 tape recordings.
The papers cover four main areas of interest. Firstly, they provide background information on policy and editorial decisions made by Keate, his superiors and his staff when he was publisher at the Vancouver Sun, the Victoria Daily Province and Bureau Chief for Time Magazine in Montreal.
Information concerning publishing and editorial decisions can be found in those files of memos and correspondence between Keate and Bruce Hutchison, Max Bell, R .A . Malone, G .N .M . Currie, F .P . Pulbications Limited and Allan Fotheringham and a few other members of The Vancouver Sun staff. These will mainly be found in the Victoria Daily Times and The Vancouver Sun files. There are also some files in Keate's home files. Files of letters and ideas for his book, Paper Boy, which was published in 1980, provide further information on policy and editorial positions as well as much information on newspaper magnate Max Bell about whom he wanted one day to write a book.
Secondly, these papers provide an insight into Keate's wide range of interests, activities and involvement in the community and public affairs particularly in the 1960s and 1970s. There are copies of over 150 speeches written by Keate. There are a series of notes, letters and a report he prepared for the federal government as a neutral mediator in 1966 dealing with the CBC's handling of personnel of the program, "This Hour Has Seven Days." Numerous correspondence files with service, recreational and community groups as well as scrapbooks, tape recordings and photographs of sportsmen and political figures furnish a picture of a man keenly interested in his city, province, and country.
Thirdly, the files cover his experiences as an information officer for the Department of National Defence - Naval Service during the second World War. They consist of correspondence with his wife, with the Department of National Defense Naval Office and a diary written while on board the ship the HMSS Uganda in 1945.
Fourthly, they show Keate, the author, at work. There are a number of drafts as well as correspondence relating to his book, Paper Boy. Various manuscripts in the collection also document his writing activities.

Stuart Keate's papers are arranged chronologically by occupation: Lieutenant, Department of Naval Defence - Naval Service; Montreal Bureau Chief, Time Inc.; Publisher, Victoria Daily Times; Publisher, Vancouver Sun and Stuart Keate, private citizen. The latter represents mainly those papers he kept after his retirement from the Vancouver Sun. This arrangement follows that evident in the papers which were donated by the Keate family. Series have been established according to what is discernible of the original order. In some cases series arrangement has been guessed at as Keate, an asiduous notetaker, was not an avid file keeper. Also, some of the files were rearranged, headings altered and file contents mixed up either by Keate for easy access to subject matter for the writing of his book, Paper Boy, or by family members after his death.

Finding aid was created by Ann Carroll in September 1990 and updated by Nayani Samarasinghe in May 1993, and was converted from PDF to AtoM by Ashlynn Prasad in April 2020.