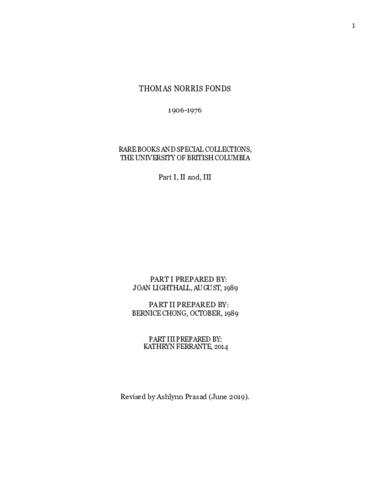 Thomas Grantham Norris was born in Victoria on September 14, 1893. His father, a newspaper man, died when he was five and he was raised by his mother. Norris was educated in Victoria and graduated from McGill University, Victoria in 1909. In 1911 Norris enrolled as a student-at-law with Barnard, Robertson and Heisterman.
World War I interrupted Norris' studies when he joined the 3rd Battery Canadian Field Artillery in France and Belgium and received the military bar and cross for his efforts. Norris later re-enlisted during World War II to serve as deputy Judge Advocate General.

In 1911 Norris was called and admitted to the B.C. Bar. He began practicing in Kelowna as a solicitor for the soldier Settlement Board. He later joined a private practice where he gained considerable knowledge of agricultural problems, irrigation law, marketing law and constitutional law while representing groups such as the B.C. Fruit Growers Association and participating on the Kelowna Board of Trade. He was appointed as Queen's Counsel in 1932. Norris left Kelowna in 1935 to begin practicing in Vancouver.

On July 17, 1962, Norris was recalled from vacation and placed in charge of the "Industrial Commission as to Shipping in the Great Lakes and St. Lawrence River System," also known as the Hal Banks Inquiry, over which he presided for 108 days. Widely respected for his independent thinking and dedication to the law, Norris retired from practice on the eve of his seventy-fifth birthday in 1968.

In addition to his long legal career, Norris was involved in a variety of other interests: the Kelowna Board of Trade, the Vancouver Board of Trade, the Conservative Party Association, the Law Society of British Columbia, the Vancouver Bar Association and the B.C. Borstal Association. In 1948, he was elected as president of Vancouver Bar Association. Between 1947 and 1957 Norris was a Bencher of the Law Society of British Columbia and Treasurer from 1957 and 1959. In 1969, the society recognized him as a life Bencher. Norris was also a founder and president of the B.C. Borstal Association.

Fonds was received in four accruals and the material within it was previously held by multiple individuals and organizations. The first accrual was donated in December 1989. The second accrual was donated to the Legal Archives of B.C. in January 1989, and then transferred to RBSC in the spring of 1990. A third accrual consisting of the items in the series “Correspondence: Professional (1925 – 1934)” was acquired from Jerry Vanson of Kelowna, B.C. in 2011. A fourth accrual consisting of personal correspondence, scrapbooks, and photographs, was received in 2014 from Thomas Norris, grandson of the fonds’ creator.

The Norris fonds documents the legal and judicial career of the Honourable Mr. Justice Thomas G. Norris. The papers date between 1906 and 1976, with the bulk of records dating between 1930 and 1975 documenting his law practice and his years on the Supreme and Appeal Courts of British Columbia.
Part I of the fonds consists largely of correspondence and printed material, including scrapbooks relating to the Industrial Commission as well as case notes and legal papers relating to other cases, 1947 - 71, (2 meters). Owing to a previous donation of annotated transcripts of the hearings of the "Industrial Commission as to Shipping in the Great Lakes and St. Lawrence River System" in 1963, other material relating to the investigation of the activities of Harold Banks was donated in December, 1989. The 108 volumes and index to the hearings are catalogued (SP HE 769 A25).
Part II of the fonds consists of professional files, judicial subject files, case files, personal papers, miscellaneous papers and photographs (7 meters).
Part III of the fonds consists of professional correspondence donated by Jerry Vanson of Kelowna in 2011, as well as personal correspondence, scrapbooks, and photographs donated by Norris’ grandson, also named Thomas Norris, in 2014.

The bulk of the records in the fonds are located in Part II in the Professional Files, Judicial Subject Files, Case Files, and Personal Papers series.

The Professional Files series, including materials newly processed in 2019, consists mostly of case files generated by Norris during his years as a lawyer in Kelowna and Vancouver. Also included in this series are subject files with additional information about areas of interest. For example, Norris created several files with documentation on the Associated Fruit Growers Ltd. and other marketing boards (1927 - 49). Other interesting subjects include the Kelowna Police Inquiry (1929-30), the Japanese claim Commission (1950), Rex v. Ducharme - murder case (1950), and politics (1932-35). The ''Politics" files provide a great deal of information about Norris' Conservative party interests and the process behind the appointment of a lawyer to Queen's counsel. Additional professional files created while Norris was practicing law in Kelowna (file#663-1109) were discovered and donated in August, 1990. The file list for these materials is now located on pages 34-39 of this finding aid.
The Judicial Subject Files series in Part II documents Norris' career on the Bench and his subject interests. The files include correspondence surrounding his appointment to various levels of the judiciary, files created during his judicial career and other judicial matters. For example, files often contain judgements, cases considered, clippings and other related materials. The case of Regina vs Bob & White documents the various issues considered before a decision was handed down on aboriginal hunting and fishing rights in B.C. Also included in this series are documents relating to the St. Lawrence Seaway Inquiry. Other files include subjects of the law such as divorce, Native Indians and Legal Aid. Files also included records created about the Admiralty Court, the Supreme and Appeal Courts of British Columbia and the Yukon Territorial Courts.
The Case Files series in Part II includes court documents and notes drafted by Norris. These case files were separated from other case files by Norris probably because of personal interests and the volume of materials. Each subseries of records document a case: Buttle Lake, in Strathona Park (1951), the Vancouver Policy Inquiry (1955), B.C. Telephone's Application for rate increases (1950), Royal Commission on Energy (1958) and Gordon Wismer v. MacLean Hunter (1954). The Buttle Lake files include transcripts of hearings conducted in Courtenay and Victoria, notes and some materials related to submissions presented to the Water Comptroller. Norris represented several groups opposed to the construction of the dam at Buttle Lake. The Wismer v. MacLean-Hunter files include examinations for discovery of Blair Fraser and Gordon S. Wismer, briefs and other materials used by Norris as he represented the Attorney General of B.C., Gordon S. Wismer against MacLean-Hunter magazine in a slander and libel suit.
The Personal Papers series in Part II reflects Norris’ personal interests, and also contains business or legal materials. For example, in this series are files and correspondence relating to the Law Society of B.C., the Law Society & Yale Bar Association meeting in 1958 and arrangements for the 1952 Judge Advocate luncheon. Other files reflect upon friendships with individuals such as Hugh Keenlyside and Leon Koerner. Materials newly added to this series in 2019 contain items such as travel souvenirs, birthday messages from Norris’ friends and family, and information related to Norris’ retirement. The Army Papers subseries contains records related to the time Norris spent serving in the Canadian military in World War II. These records range from 1939 to 1959, with the bulk of the records dating between 1941 and 1945.
Further information about each of the series in Parts I, II, and III can be found in the Series Descriptions on pages 8-13 of the PDF finding aid.

This finding aid consists of three parts, which correspond to the four separate accruals of the fonds. The third and fourth accruals are both described in Part III of the finding aid.
Part II of the fonds was donated to the Legal Archives of B.C. in January, 1989, where it was processed by the archivist, Bernice Chong. The papers were transferred to the UBC Library in the spring of 1990. Part II contains a series of Professional Files, which are arranged according to file numbers assigned by Norris.
In 2019, an additional 3.84 meters of formerly unprocessed material in Boxes 52-65 were arranged and described by Ashlynn Prasad. Descriptions for this material have been added to each of the three existing parts of the finding aid, due to the fact that material in the 2019 addition was thematically related to materials which had already been processed. For example, a description of materials in the 2019 addition that were related to professional files has been appended to the existing Professional Files file list in Part II (see page 40). Some materials in 2019 addition to the Professional Files series did not have numbers assigned by Norris; these files have been arranged alphabetically. Notes have been made in the finding aid to indicate which materials were newly processed in 2019.
Due to a substantial amount of material in the 2019 addition related to Norris’ time serving in the Canadian army during World War II, a new Army subseries has been created and nested within the Personal Papers series.
Materials are mostly described to the file level, and in some cases (such as correspondence), to the item level.

The following three monographs have been removed from this fonds to be catalogued separately in Rare Books and Special Collections:
• Indians and the Law, a survey prepared for the Honourable Arthur Laing, Department of Indian Affairs and Northern Development
• Report of Industrial Inquiry Commission on the Disruption of Shipping (Schedules)
• Report of an Industrial Inquiry Commission Concerning Matters Related to the Disruption of Shipping on the Great Lakes, the St. Lawrence River System and Connecting Waters.