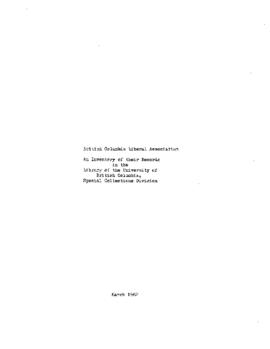 The fonds consists of an incomplete set of convention minutes and proceedings (1927-1959), scrapbooks of clippings from 1963, campaign literature, files from Cam Avery including material relating to the development of various Liberal policies, files from Pat McGeer pertaining to his tenure as party leader, papers reflecting election coverage in each riding for certain years and press clippings relating to the political careers of several Liberal MP's from 1969 to 1972.