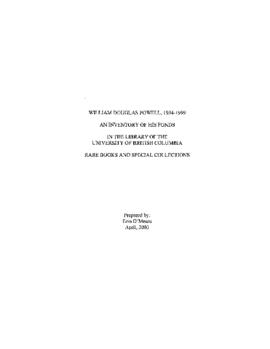 The fonds consists of drafts of a long version and a short version of an unpublished manuscript, "Running Scared", as well as notebooks and subject files dealing with the consequences of dieselization of the Canadian Pacific Railway (CPR) in the Revelstoke Division betweek 1957 and 1984. Powell collected extensive documentation from the relevant unions, Brotherhood of Locomotive Firemen and Enginemen and the United Transportation Union, in response to this event and it is included in the fonds.