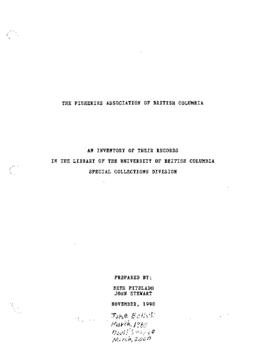 The fonds consists of minutes, financial records, negotiations and agreements, speeches and subject files generated by the Fisheries Association. The subject files include information on the activities of the Association including labour, safety, pollution, resources, waste water and licence limitations. The material was primarily generated during the period 1955 to 1975, except for minutes of the Salmon Canners' Operating Committee (1943-1948), agreements (1946-1956) and one subject file on the Native Brotherhood of B.C. (1947-1958).

The fonds consists of records generated by the FCBC and its predecessor bodies, the FABC and the SCOC. Records of the SCOC include minutes and some records pertaining to its bargaining agent, regulatory, and fishing development and protection activities. Records of the FABC include minutes, correspondence, financial and other administrative records, as well as material pertaining to its various functions. This includes records pertaining to its public relations activities, and its roles as an industry bargaining agency, as an industry representative on international treaties and fisheries commissions, and as a liaison and lobby group with the federal, provincial and municipal governments on issues such as resource protection and government safety and health regulations. FCBC records relate to its pursuance of matters related to the West Coast fishing industry, including records concerning its participation in various federal and provincial meetings, issues related to the native fishery, and minutes of various committees through which the FCBC conducted its affairs.