[Residents of Dawson outside of Commissioner's office, on the dome at midnight, and Dawson lawn tennis tournament finales]

Contains 2 photographs of the residents of Dawson outside the commissioner's office.

Passenger list from the Montclare's 29 May 1930 sailing from Montreal to Cherbourg, Southampton and Hamburg.

The fonds consists of textual records, photographs, and audiovisual materials, spanning the period 1905-2001, related primarily to Gordon Goichi Nakayama’s career with the Anglican Church of Canada and missionary work, religious and secular research and writing projects (the latter primarily related to Japanese internment and the Japanese Canadian community), as well and his personal and family life and administrative affairs. The fonds is arranged by function and documentary form. The fonds consists of eight series: Personal and administrative records and correspondence; clippings and ephemera; photographs; writings and publications; diaries; notes and notebooks; church and missionary work records; and audio-visual materials

Records related to Nakayama’s roles with the Anglican Church in Vancouver, B.C., and Coaldale, Alta., and his global missionary work include travel documents and itineraries; incoming and outgoing correspondence; church financial records and reports; church publications and parishioner lists; licenses and certificates; conference materials; clippings and ephemera; diaries; notes and notebooks; and other materials.

Records relating to Nakayama’s religious and secular research and writing projects include manuscript and typescript drafts, as well as final published versions, of religious and biographical / autobiographical works, non-fiction works on the Japanese Canadian / Issei community, and poetry, as well as supporting materials, such as publishers’ contracts and correspondence and research materials.

Alaska and British Possessions-- Atlas of the World

A young printer in San Francisco 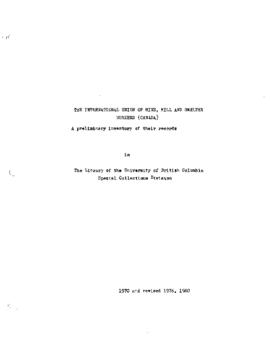 My experiences in the Yukon

[Yip Mow with employees on a cannery wharf]

Unloading salmon at a cannery

[Letter from the Chinese Produce Peddlers' Association to Yip Quene]

Letter outlining how the Chinese Produce Peddlers' Assoc. requests Yip Quene to liaise with outside parties.

Woven basket of Chow Kwong Ho, who travelled with it from Hong Kong to Vancouver via a Canadian Pacific trans-Pacific Empress steamship, coming to Canada sometime around 1920

Model of the Empress of Asia

Model of the Empress of Asia made for the Canadian Pacific Railway Company by the shipbuilders of this vessel, the Fairfield Ship Building and Engineering Company of Glasgow, Scotland. The "Empress of Asia" models a quadruple screw turbine steamship, launched in 1912 for the Canadian Pacific Railway's trans-Pacific mail and passenger service, which saw distinguished service in peace and war for an extraordinary thirty years, travelling the route across the Pacific from Vancouver to Victoria to Yokohama to Kobe to Nagasaki to Shanghai to Hong Kong to Manila and return. An accurately scaled representation at 1:50 (1/4 in.:1 ft), the model consists of an exquisitely fine detailed wood structure, slightly longer than three and one half metres, painted in the Canadian Pacific colours of the period, fitted with very finely detailed brass rails and threaded stanchions, ship's bells, search light, life buoys, lanterns and propellers, rigging, gang ways and ladders, deck equipment including deck telegraphs, compasses, ship's wheel and binacles, hatches, housings, bollards, capstans and anchers, with working turnbuckles, pulleys, winches, three derricks, four cranes and other devices, and featuring lacquered wood promenades atop a strikingly long and elegant white-painted body of seven decks and top houses, surmounted by three slanted great funnels guyed to the tops of houses, two masts, one at each bow and stern, and a host of cowls with deep red-painted inside faces, sixteen covered Engelhardt boats and eighteen open life boats, complete with boathook and two pairs of oars each, suspended along the sides of the promenade and bridge decks, and bearing the name 'Empress of Asia' in brass letters affixed both port and starboard side and stern, the whole mounted on six turned and profiled brass posts on a base of solid mahogany and cased entirely in a cabinet, constructed in 1999 in the style of a period ship model case contemporary with the model of solid mahogany cornerposts with glass panes surrounding on top and all sides, set on a mahogany pedestal supported with six legs, all matched grain wood cut from a single four metre slab. Two original raised and tilted panels with the name of the ship, its builder, overall length, breadth, depth moulded, gross tonnage, and speed are fixed to the model base, one at each end. The model was purchased from Allenby Boake in 1993 by Dr. W.B. Chung, in a considerably damaged condition with the original case missing: after over 4000 hours of restoration the model was recased in 1999 in mahogany and glass.

Stereograph. Handwritten on the verso: "Stage Road 1500 ft after run on Jackass Mt."

Inscribed to Yip Kew Him.

Portrait of "The Le Wan Nian troupe", the cast of a Cantonese opera staged in Vancouver with banners above the troop complimenting the beauty and elegance of their performance.

Photo was a gift to the Nelson C.N.L. as a memento of the 2nd anniversary of the Nationalist Revolution in China.

A digital copy of this image is on display in Exhibition Drawer 22.2 in the Chung Gallery.

Dock Yip on campus at the University of Michigan

Handwritten on verso: "Vegetable men meet on Dupont St. (Pender St.) 5 am to sort their produce. Timms." Stamped on the verso: "This Copyrighted (strikethrough) Photograph is issued to Hudson Bay Co for the exclusive use of the above named buyer or publisher. Copying or Syndication without my written permission not allowed." Stamp is of the same ink as the photographer's stamp.

[Man with horse and cart]

Stereoscope view of a man balancing baskets with Victoria inner harbour beyond.

[Portrait of a woman and a man in Chinese dress]

[Portrait of a man with a chrysanthamum boutonniere, Nelson, B.C.]

Members of the Chinese student concert in aid of the U.B.C. Stadium Fund

Depicts wooden store fronts, horses hitched to carriages parked on the side of the street and men walking in street. Dupont Street is now Pender Street.

A panoramic view of the Canadian Pacific Railway station and wharf in Vancouver as well as the surrounding city buildings, British Columbia, in original frame.