The fonds consists of records related to the operation of Inverness Cannery. Records span from the early 1900s all the way through to the 1950s when the cannery was closed and turned into a fish camp. The cannery was owned by J.H. Todd and Sons Ltd. from 1902-1950. The fonds is comprised of seven different series: Correspondence series, Financial series, Fish Canning series, Fish Catching series, Inverness Cannery School series, Legal series, and Publications, Pamphlets and News Clippings series. 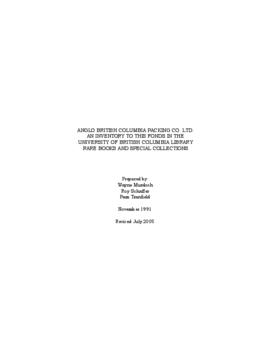