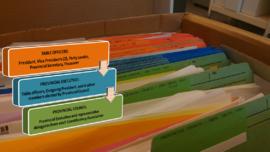 Records of the table officers, provincial executive, and provincial council

This series consists predominantly of the meeting minutes, agenda, notes, and supporting documents circulated for review or discussion of the NDP's Table Officers, Provincial Executive, and Provincial Council.

Outside of the Provincial NDP Convention, these three bodies comprise the most important governing bodies of the Party. The Table Officers include the Party President, two Vice presidents, the Party Leader, the Provincial Secretary, and the Treasurer. Table Officers would meet regularly, sometimes more than once a week via teleconference, to manage the strategic direction and positioning of the Party, discussing relevant breaking news, campaign strategy, public messaging, budgetary considerations, and party operations. Each member was charged with specific executive tasks, and would prepare reports on their activities for the Provincial Executive and Provincial Council.

The Provincial Council acts as the Party's broadest governing body between conventions, able to deliberate and vote on motions sent from Convention for review and further discussion, and/or emergency motions that cannot wait until the next Convention. Council was comprised of all Executive members, as well as an elected delegate from each constituency association, and representatives from the YND and "affiliated organizations" (file 430-09). Council would meet less frequently, usually 4 times a year, to make policy decisions, set Party budgets, allocate revenue sharing strategies, share constituency reports, and assess the Party's direction, among other activities.