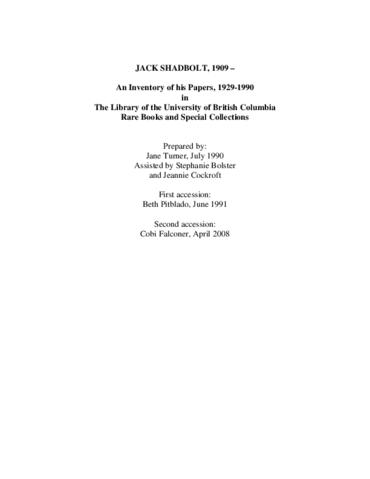 5.36 m of textual records and other material.

Jack Shadbolt has developed an international reputation as a distinguished modern artist, lecturer, and writer. Throughout his career he has written extensively about art and the creative process. He was born in Shoeburyness, England, in 1909, and in 1912, emigrated with his family to Victoria.

In his youth, he spent long hours studying the collections of Northwest Coast First Nations Art in provincial museums and galleries. He met Emily Carr in 1930, and was deeply influenced by her work. At that time, he was already aware that he wanted to become an artist. Shadbolt attended Victoria College in 1926-1927 and entered the Provincial Normal School in Victoria in 1929. He began his career as a teacher in Duncan, and in 1931 moved to Vancouver where he taught at Kitsilano High School for several years.

During the thirties, Shadbolt began to articulate his artistic ideas that the development of a modern Northwest Coast indigenous art must be profoundly rooted in a sense of place. In this sense, Shadbolt felt modern artists could learn from First Nations traditions. During this time, his work reflected the influence of Surrealism, and much of his art documented the modern industrial landscape of Vancouver. In 1937, he studied in London, and then in Paris with Andre Lhote. In 1938, he began teaching at the Vancouver School of Art, and was the Head of Drawing and Painting Section until 1966.

In 1942, Shadbolt joined the army, and in 1944 was assigned to the War Artists Administration in London. After the war, in 1945, he married Doris Meisel Shadbolt, and returned to Vancouver. In 1948, he attended the Art Students' League in New York where he was influenced by the work of the Abstract Expressionists. In the same year he audited a course in the history of mythology at the New School for Social Research.

In the fifties, he exhibited frequently, and led the West Coast renaissance in painting. In 1966, after 35 years of teaching, he left the Vancouver School of Art to paint full time. After several trips to the Mediterranean, he introduced sharp, bright colour into his palette.

In the seventies, he extended his interest in native and primitive art and produced a series of fetish images and ritual transformation themes on the growth cycle of the butterfly. In 1975, he traveled to Iran, Afghanistan and India, which resulted in his large scale India Suite of twenty panels in serial form.

His art is widely represented in major public and corporate collections in Canada. He has exhibited his work in numerous solo exhibitions in major centres in North America and Europe. His work has also been included in many important group exhibitions in Canada, the United States, Mexico, Europe and Australia.

The fonds consists of Shadbolt's private journals, notebooks, lecture notes, sketch books from his work with the Art Students' League of New York, 1948-1949 as well as 6 sketchbooks from the 1960s, a collection of his loose drawings and studies, an extensive collection of photographs of Shadbolt's paintings, including colour transparencies, slides of a photographic work entitled "Year", family photographs, personal and professional incoming correspondence, his picture reference file of postcards and magazine clippings, exhibition catalogues and other printed material. Correspondents include John Macdonald, Wilfred Watson, Max Maynard, Jock Firestone, Molly Bobak, George Swinton, and Ron Thom.