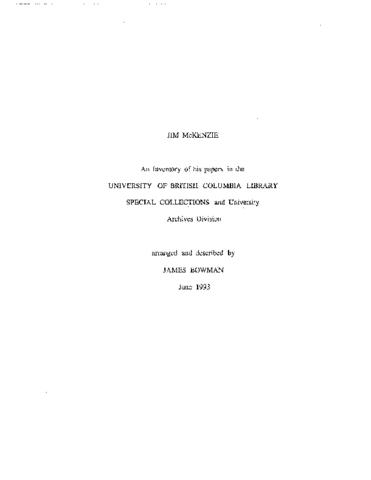 Shortly after arriving in Canada from Great Britain, James McKenzie joined the Cooperative Commonwealth Federation in 1952. He supported the development of the New Democratic Party and later served on its Provincial Council. McKenzie served first as secretary (1968-1993) of the Alan Boag Foundation, a non-profit society and, in 1993, became its president.

The fonds consists primarily of records arising from a Boag Foundation-sponsored conference in 1983 based on the theme "Meeting the Challenge of the Eighties and Beyond." Many of the participants were prominent members of the New Democratic Party. Other materials in the fonds include correspondence of the Constitution and By-Laws Committee of the Provincial NDP (1977), political educational material from the Canadian Labour Congress, notes and press clippings.