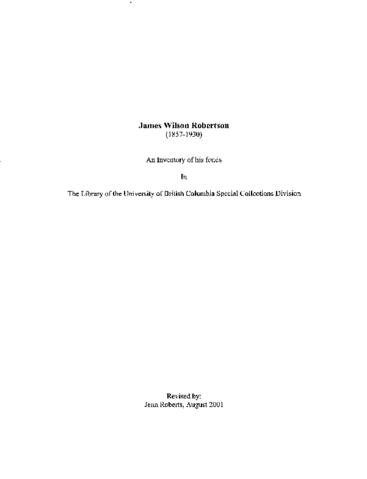 James Robertson was born in Scotland and in 1875 came to Canada where he joined his father in farming and in the management of cheese factories and food exports to the United Kingdom. Robertson was an educationalist and agricultural expert. He participated in many national service organizations and chaired two royal commissions: an investigation into industrial training (1910) and an enquiry into the Sydney labour unrest of 1923. He was Dairy Commissioner for the Dominion from 1890 to 1904. From 1905 to 1910, Robertson served as Principal of Macdonald College. In 1919 he was appointed Canadian Director of Food Supplies and represented Canada on the food section of the Supreme Economic Council in Paris. Robertson received honourary LL.D. degrees from four universities and was created a C.M.G. in 1905.

The fonds consists of correspondence, addresses, lectures and reports. The fonds also contains pamphlets relating to Robertson's activities and some photographs and memorabilia.