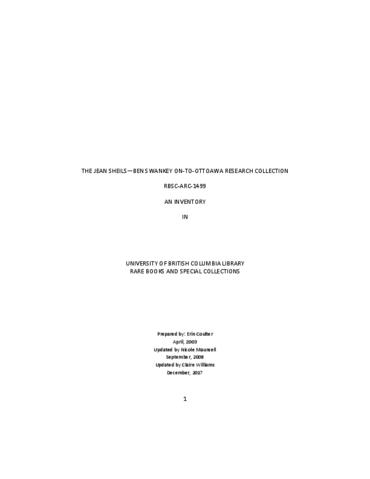 ca. 1 metre of textual records and other material.

Jean Stewart Sheils was born Jean Stewart Evans on 12 February 1927 in Vancouver, British Columbia. She was the second child of Ethel and Arthur Slim Evans. Her older brother Stewart was born on 13 April 1922 and died in 1925 during the diphtheria epidemic in Vancouver. Ethel Jane Evans (nee Hawkins) was from Drumheller, Alberta and Arthur Herbert Evans was a well-known labour rights organizer originally from Toronto, Ontario. He led the 1935 On-to-Ottawa Trek during which over 1,000 unemployed men rode the rails to Ottawa to appeal to the government for better working conditions at the government organized labour relief camps. This Trek ended in Regina on 1 July 1935 when Trekkers and supporters were confronted with violence by the local police and the RCMP. Jean attended numerous public schools in British Columbia. After high school, she worked in a variety of jobs including employment as a steward on Canadian Pacific Railroad steamships, waiter, sales clerk, and manager of numerous bakeries for a leading grocery chain. She was working on a CPR ship in Victoria when a car struck her father while he was crossing the street on 23 January 1944. Jean returned to Vancouver to be with him through his hospital stay, before he passed away on 13 February 1944 at Vancouver General Hospital from injuries sustained from the accident.

On 13 June 1947, Jean married Seaman Les Sheils of Hornby Island. He later became a Mate and then a Master of deep sea towing vessels and worked in the North Atlantic, North Pacific, the Arctic, and the Caribbean. Later he worked for BC Ferries. They had two children: Jane, who died two days after being born, and Arthur, who was born in 1949 and died in 1984 in a car accident.

Jean devoted her adult life to the cause her father had believed in: fair work and wages. She was a founding member of the On-to-Ottawa Trek Committee that was formed in 1985 to celebrate the 50th Anniversary of the Trek. This Committee was the predecessor to the On-to-Ottawa Historical Society, which produced a video in addition to organizing the 60th Anniversary of the Trek. As well as performing volunteer work for the labour rights cause, Jean and Ben Swankey co-wrote a book in 1977 entitled Work and Wages! , a semi-account of the life of Arthur “Slim“ Evans. Through her work she maintained close relationships with several of the original Trekkers, notably Bob “Doc” Savage and Bobbie Jackson. Jean was also involved in the Hornby Island community, serving on the Co-op Board of Directors and on several ratepayer boards, as well as being involved with the Hornby Recycling Depot.

Jean passed away on 27 December 1995 at Saint Joseph’s Hospital, Comox, British Columbia, at the age of 68 after a lengthy battle with cancer.

The research collection consists of textual records, newspaper clippings, documents, photographs, printed material, photographs, audio cassettes, and a VHS video cassette relating to the life of Arthur Evans, the On-to-Ottawa Trek Committee, the On-to-Ottawa Historical Society, and the publication, Work and Wages! . Rough drafts, research notes and material, correspondence, interviews, and Regina Riot Inquiry transcripts are part of Jean Sheils' work in co-writing Work and Wages.The On-to-Ottawa Historical Society material covers the records generated by the 1992 production of the On-to-Ottawa video, which was directed by Sara Diamond and co-produced with the Women's Labour History Project. In addition, there are files and photographs created by Jean Sheils to document the lives of Arthur "Slim" Evans and his wife, Ethel Evans between 1920 and 1944.

Many records were found to be extremely brittle and/or decomposing. Where this was the case, the archivist has photocopied and discarded the original document. Additionally, many documents are very fragile, and should be handled with care.

The fonds of Jean Sheils was brought to the Special Collections and Rare Books Branch of the University of British Columbia Library on 4 November 1998 by Head Curator George Brandak. The fonds, originally housed in a large tin trunk, was donated by Robert Ralston, Literary Executor of the estate of Les Sheils, Jean Sheils’ husband. In 2008, an accrual was made to this fonds of papers that had been used by both Swankey and Shiels. The accrual was donated by David Yorke of the On-to-Ottawa Historical Society.

The first accession of this fonds features records from 1895-1995. This accession was arranged and described in 2003. The accrual donated in 2008 was arranged and described by different staff. In 2017, five unprocessed boxes were found in the archival storage area. These were arranged and described by the archivist, and their description added as an addendum to the PDF finding aid. Please see attached PDF for further information and file inventory. Where established, the original physical order of files has been maintained. However, the remainder of the records have been physically re-arranged to reflect the order represented in this description.

The finding aid was updated by Claire Williams in December 2017.