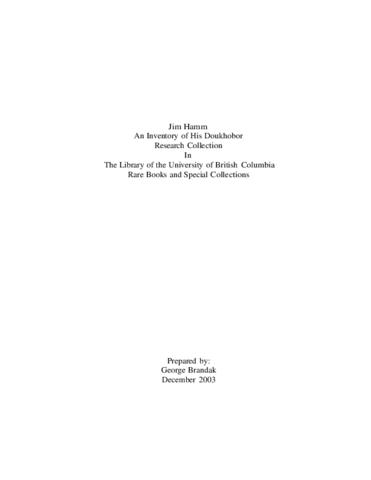 1.1 m of textual records and other material

Over the years Jim Hamm has production managed the feature films: Terminal City Ricochet, Shelly, and Regeneration . He line-produced the docu-dramas, A Chance For Change, about aids awareness in native communities and The Sentencing Dilemma, an examination of the sentencing issues the courts face when prosecuting assault cases. He also production managed the documentary, Gurdwara – House of the Guru, on the spiritual life of the Sikh community in Vancouver.

The Jim Hamm Doukhobor Research Collection consists of two VHS copies of the documentary film, The Spirit Wrestlers, and other materials relating to the production of the film such as Betacam SP videos (camera masters), VHS videos screening copies, 35mm slides, digital photos on CD, audio cassettes and transcripts of the interviews in hard copy and on CD. In addition, footage logs, printed material, photographs and photocopies of photographs relating to the film have been created or collected, 1999-2002.