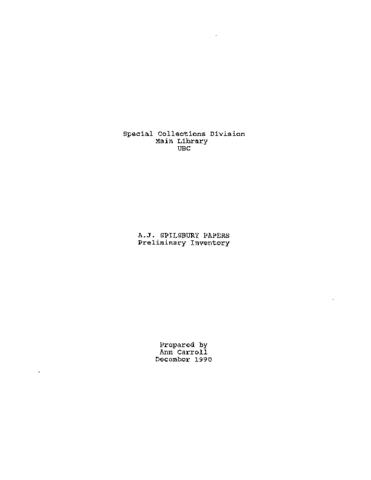 Born in Findern, Derbyshire, England, Jim Spilsbury grew up on the B.C. coast, mainly on Savary Island. His entrepreneurial career evolved from radio communications with Spilsbury & Hepburn Ltd. and Spilsbury Communications to ownership of Queen Charlotte Airlines Ltd. to author of three books on his coastal experiences to painting pastels of the B.C. coast.

The fonds consists of family papers including genealogical findings and legal documents concerning land owned by his family in the New Westminster District (Whonnock), 1870-1910; correspondence and newsclippings; records gathered or kept by Spilsbury on Spilsbury and Hepburn Ltd. and its successors in radio communications, 1940-1985; records of Queen Charlotte Airlines Ltd., 1946-1955; and a large collection of ca. 6000 photographs (including cartes-de-visite and cabinet cards) negatives, and slides, mainly taken by Spilsbury. The photographs consist mainly of images relating to Savary Island, Vancouver Island and other area of B.C.'s coast where Spilsbury lived and carried out his activities. As well as images of early native and logging sites and towns and topography of B.C., they also provide a record of Spilsbury's paintings. Photographs also depict Spilsbury's English relatives (1870-1906), friends and family at New Westminster, Whonnock and Savary Island, logging operations at Theodosia Arm in the 1930s, aircraft and personnel of Queen Charlotte Airlines, and equipment and personnel of Spilsbury and Hepburn.