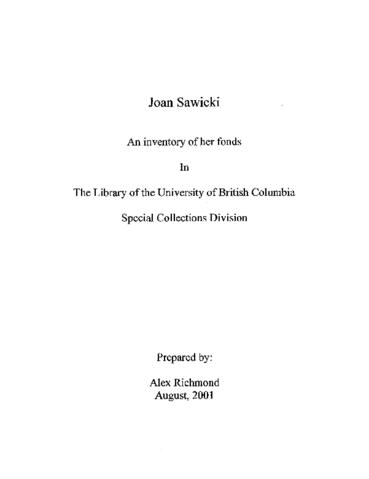 Joan Sawicki was born in Burnaby, British Columbia in 1945. The family moved to Terrace, B.C. in 1956. In the 1960s Sawicki attended the University of Victoria earning a B.A. in Education in 1968. She majored in both history and geography. Sawicki was a secondary school teacher in Williams Lake from 1968 1969 and in Armstrong from 1971 1972. Sawicki gradually developed an interest in environmental and agricultural issues. She eventually worked in Ottawa and in British Columbia for the Ministry of Agriculture and the British Columbia Agricultural Land Commission. Prior to her career in civic and provincial politics Sawicki was a partner in a land-use consulting firm, dealing with natural resource management issues. From 1987 to 1990 Sawicki served on the Burnaby City Council. She chaired the environment and waste management committee and sat as a municipal representative on both the Greater Vancouver Regional District waste management committee and the Metropolitan Board of Health. Sawicki also served as the director of the International Centre for Sustainable Cities. In 1985 she was nominated to run for the New Democratic Party for the riding of Burnaby-Willingdon in the 1986 provincial election. Although she was defeated in 1986, Sawicki ran again winning the same riding in 1991 and 1996. She served as MLA for Burnaby-Willingdon from 1991 - 2001. Sawicki was elected speaker of the Legislative Assembly in March 1992, serving for two years. She then served as Parliamentary Secretary to the Minister of Municipal Affairs from April 1994 to May 1996 before assuming the same position for the Minister of Environment, Lands and Parks from June 1996 to January 1998. She eventually resigned from her position over issues concerning a proposed land development project that was to take place on protected land under the Agricultural Land Reserve at Six Mile Ranch near Kamloops. From July 1999 to November 2000 Sawicki served as Minister of Environment, Lands, and Parks. Sawicki currently lives with her husband, Gary Runka, near Hagensborg, British Columbia.

The fonds consists of newspaper clippings, correspondence, handwritten notes, news releases, reports, minutes, government brochures, and maps collected by Sawicki during her years on the Burnaby City Council and as an MLA for the riding of Burnaby-Willingdon. The majority of records relate to issues on the environment and agriculture which reflect Sawickis major interests while serving at both civic and provincial levels. At the civic level the fonds includes records from Sawickis work on several environmental and waste management committees. The fonds also includes a series on the Six Mile Ranch affair which relates not only to Sawickis role as an MLA for the New Democratic Party and her position as Parliamentary Secretary to the Minister of Environment, but also to her long-term commitment to, and participation with the Agricultural Land Commission. The fonds includes numerous reports and submissions regarding the Six Mile Ranch affair.