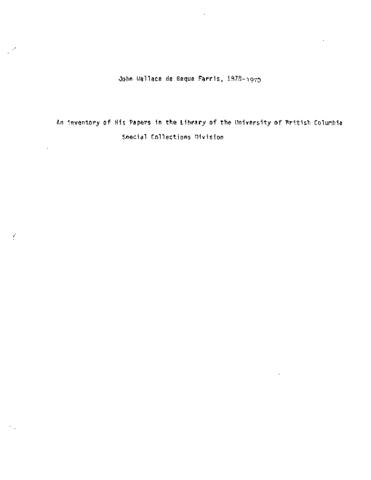 John Farris was born in White’s Cove, New Brunswick on December 3, 1878. He was educated at St. Martin's Seminary, Acadia University and at the University of Pennsylvania where he obtained his LL.B. In 1903 he was called to the bar in British Columbia and founded the law firm, Farris, Vaughan, Wills & Murphy LLP. He married Evlyn Fenwick Keirstad in 1905, and had four children, Katherine Hay, Donald Fenwick, Ralph Keirstad, and John Lauchlan.

Farris ran unsuccessfully for the general election of 1907 for Vancouver and in 1909 for Richmond. He was elected to the Legislative Assembly of B.C. in 1916 as Liberal MLA for Vancouver and continued in that position until 1924. Farris was Attorney General and Minister of Labour (1917-1922). He was also active in the Canadian Bar Association, serving as president in 1937-1938. Farris was called to the Senate in 1937 and served until his death on February 25, 1970.