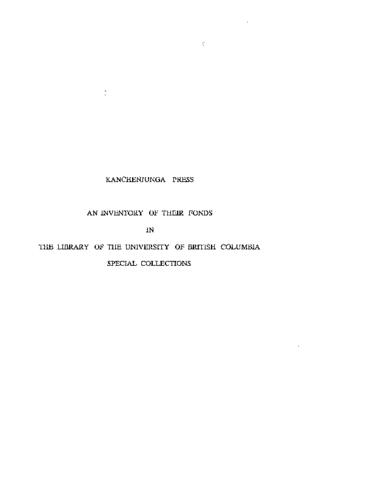 Kanchenjunga Press was founded in Bloomington, Indiana in 1972 to publish quality modern poetry by writers who were unknown or had not yet made a reputation for themselves. The Press endeavoured to produce inexpensive paperback volumes which would withstand many readings. The Press soon moved to California and expanded into the Vancouver, British Columbia, area by forming a cooperative agreement with a small Vancouver publishing company, Sono Nis, later taken over by the Charles Morris Company of Victoria.

The fonds consists of an extensive correspondence file dating from 1973 to 1978, as well as typescripts of poetry and the Indian Journals of K.S. Keys, poetry manuscripts by Dennis Lee and J. Michael Yates and published books of poetry.