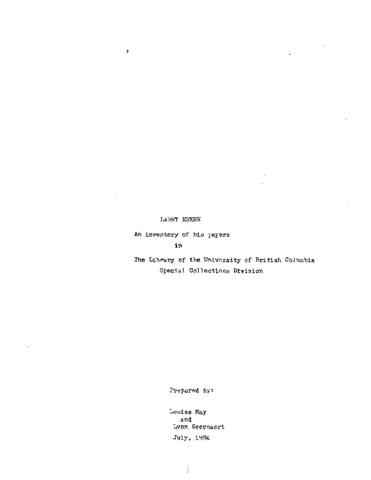 Larry Kuehn obtained his Masters degree in Education from Reed College (Oregon) and started his teaching career in Kitimat, B.C, in 1968. He later taught in Midway, B.C., and Kamloops. He became a member of the Executive of the B.C. Teachers' Federation in 1977, serving as president of the Federation from 1981 to 1984. In 1984, Kuehn left the BCTF to serve as a coordinator of Operation Solidarity, a broadly-based group of B.C. labour unions committed to reversing the provincial government's labour policies. Kuehn worked with Operation Solidarity until 1986.

The fonds consists of personal files of the president of the BCTF (1981-1984) which chronicle both the Federation's activity as well as Kuehn's involvement with the labour Solidarity Coalition. More broadly, the fonds documents various aspects of provincial government cutbacks in education.

No photocopying without permission of Larry Kuehn.